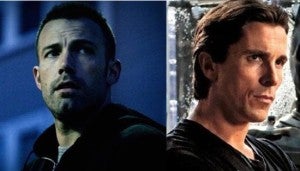 We’ve covered quite a bit of news from Kevin Smith’s latest Hollywood Babble-On podcast, which really should be required listening for anyone who is either for or against Ben Affleck’s casting as Batman. From the previous articles, we’ve run on the podcast, several readers have remarked to us that they were initially against Ben Affleck playing Batman, but Smith’s comments actually turned them around on the idea.

In the podcast, Smith describes Ben Affleck being cast as Batman as the greatest thing that ever happened. He waxes poetically about Affleck’s love of Batman, describing in detail a Batcave entrance that Ben Affleck built in his old house. He even theorizes that Affleck took the role so he can be like Robert Downey Jr. and have kids look up to him. However, we saved what will probably be Smith’s most controversial statements for last.

How will Ben Affleck do as Batman in comparison to Christian Bale? Much of the backlash against Ben Affleck’s casting has been due to the fact that many fans wanted to see Christian Bale return in a continuation of Nolan’s Dark Knight trilogy. However, as beloved as Christian Bale was as the Batman, Kevin Smith pointed out some areas where he thinks Affleck will make for a better Batman than Bale.

“A lot of people, even as much as they love Bale and Nolan’s Batman, everyone picked universally on the voice,” said Smith. “But every actor does the voice differently, when they’re Bruce Wayne, they speak in their normal voice, as Batman they drop a few octaves or try something else.”

As far as Affleck’s Batman, Smith suggests that they have him reveal that he’s using a voice modulator, which would allow them to change around his voice in post-production and make it really ‘creepy.’

In addition to improving on the voice, Smith also thinks Ben Affleck could do a better job with some of Batman’s lines. In specific, Smith points to a scene in The Dark Knight Rises, where Bane asks Batman, “So you’ve come back to die with your city?” In response, Batman says, “No, I come back to stop you!” Smith describes Batman’s response as “one of the worst lines in cinema history.”

Smith claims, “With the Batfleck that will never happen, he will always have something to say in that moment, where you will be like, ‘That’s smooth. That’s Affleck.’”

So what do you think? Could Ben Affleck actually be a better Batman than Christian Bale?

Will Ben Affleck Make A Better Batman Than Christian Bale? Kevin Smith Seems To Think So.

Middle-Earth: Shadow of Mordor Developer May Be Working on a DC Game

Pokemon Anime to Air Special About Suicune... But There's a Catch