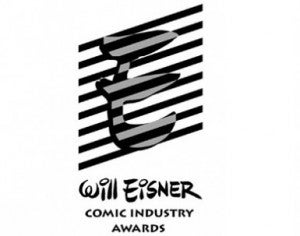 Comic-Con International announced yesterday that submissions are being accepted for consideration by the judges for the 2013 Will Eisner Comics Industry Awards. Publishers are generally expected to make the nominations, but creators can submit materials for consideration if their publisher is either no longer in business or unlikely to participate in the nomination process. According to a statement, the tentative categories include best short story, best single issue, best continuing comic book series (at least two issues must have been published in 2012), best limited series (at least half of the series must have been published in 2012), best new series, best publication for kids, best publication for teens, best humor publication, best anthology, best digital comic, best graphic album–new material, best graphic album–reprint, best reality-based work, best archival collection, best U.S. edition of foreign material, best writer, best writer/artist, best penciler/inker (individual or team), best painter (interior art), best lettering, best coloring, best comics-related book, best comics journalism periodical or website, and best publication design. Some of those categories can be left out entirely if the judges find them wanting; notably, last year's awards had no entry for new series. Given the level of excitement surrounding Brian K. Vaughan's Saga, though, it seems unlikely that will be an issue this year. The best digital comic category is open to any new, professionally produced long-form original comics work posted online in 2012. Webcomics must have a unique domain name or be part of a larger comics community to be considered. The work must be online-exclusive for a significant period prior to being collected in print form. The URL and any necessary access information should be emailed to Eisner Awards administrator Jackie Estrada: jackie@comic-con.org. The Eisner Award nominees will be announced in April, and online voting (as well as pdf ballots) will be available to professionals in the comics industry, including creators, editors, publishers, distributors, and retailers. Physical ballots will also be sent to comics professionals and publishers. The results will be announced by celebrity presenters at the gala awards ceremony on the evening of July 19 at Comic-Con in San Diego. Further information on the Eisner Awards and a downloadable pdf of the Call for Entries can be found here.

American Gladiators Reboot In The Works From WWE And MGM

Teen Wolf Revival Movie In The Works For Paramount Plus