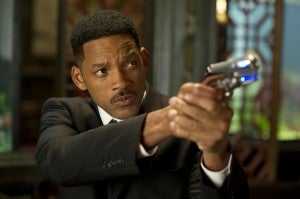 With Avengers rolling over every movie in its path, Will Smith has successfully grabbed some buzz for Men In Black 3 by slapping a reporter at the Moscow premiere of the movie. While Will Smith was walking the red carpet (which looks to have actually been a black carpet), a Ukrainian television reporter named Vitalii Sediuk attempted to show him some affection.

The reporter grabbed Will Smith and appeared to be kissing him on both of his cheeks, but Smith says he also tried to kiss him on the lips. Smith pushed the reporter away and said, “C'mon man, what the hell is your problem buddy?” Then, Smith lightly slapped the reporter across his cheek.

As he continued down the black carpet, Smith added, “He tried to kiss me on my mouth. This joker, he's lucky I didn't sucker punch him. Sorry, I said that on camera. No, no, it’s all good.”

We can see it now. Slapping reporters could become the new "in" way to build buzz at movie premieres. Men In Black 3 opens in theaters in the United States on May 25, 2012.

Will Smith Slaps Reporter At Men In Black 3 Premiere

League of Legends Is Testing a New Ranked Feature