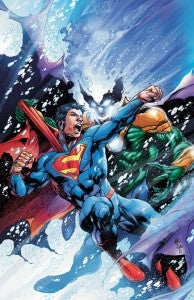 In March, co-writers Keith Giffen and Dan Jurgens will take over the writing chores on Superman and while they've promised new, original characters and a direction that takes cues from departing George Pérez without being held hostage by his run, the solicitation for Superman #7--the team's first issue--gives us something unexpected.

That's right, one of the WildStorm Universe's most powerful and persistent villains, appears on the cover of Superman #7, duking it out with the Man of Steel.

Given the stealth crossover in their respective #1 issues, where both Superman and Stormwatch (a title facing its own creative changes in March) dealt with a mysterious alien horn being blown to summon "something" to Earth, one has to wonder if there's a connection there.

We've already speculated at what the connection between the mysteries of Superman and Stormwatch might have in common a few times, but the idea that the Last Son of Krypton is getting a visit from a character with a direct line to titles like Grifter and Voodoo casts an even bigger spotlight on those possibilities.

Add to this the cleverly-hidden WildStorm character appearing as a stealth supporting cast member in Superboy, and we've got a very clear connection between the Superman family of titles and Co-Publisher Jim Lee's old stomping grounds.

Will SUPERMAN #7 Answer Some Lingering Wildstorm Questions in The New 52?