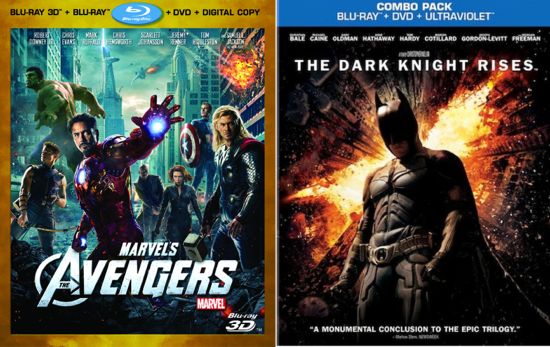 Of course, many Batman fans and Christopher Nolan devotees would argue that The Avengers had the advantage of higher 3D ticket prices. Also, The Dark Knight Rises box office take was hurt by the tragic theater shooting in Aurora, Colorado. It’s a valid argument because according to our calculations, The Dark Knight Rises likely could have made around $72 million more if it has been released in 3D. And while it’s difficult to estimate, the Aurora shooting very likely caused quite a few people to avoid movie theaters out of fear of copycat shootings.

On the one hand, The Avengers is more kid-friendly, so it could hold an advantage from parents buying as a stocking stuffer during the holiday season. On the other hand, people who skipped The Dark Knight Rises in theaters after the Aurora shootings could be anxious to finally see the movie for the first time. Plus, while The Avengers held the advantage with higher 3D ticket prices, The Dark Knight Rises could hold the advantage with box sets.

Because of legal issues, The Avengers Phase One box set has been delayed until next year, but The Dark Knight trilogy box set is being released this year. The chance to get all three of Nolan’s Batman films on Blu-ray is probably something that most fans simply won’t be able to pass up. The limited edition Bat Cowl also has to one of the coolest DVD/Blu-ray premiums ever. Ever since Amazon started taking pre-orders for The Dark Knight Rises, it has been beating The Avengers pretty regularly on their best sellers chart.

Will The Dark Knight Rises Beat The Avengers In DVD Sales?