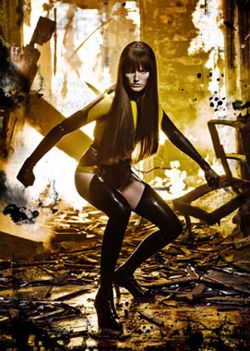 How much money will the Watchmen movie rake in on opening weekend? One big factor working against the Watchmen movie is that it is two hours and forty-three minutes in length. Theaters can’t get in as many showings with a long movie. Another big thing working against the Watchmen movie is its “R” rating. There has never been an “R” rated movie to have a $100 million opening weekend. The biggest “R” rated movie opening weekend ever was The Matrix Reloaded, which according to Box Office Mojo made $91 million during its opening weekend. Working in the Watchmen’s favor is that the third biggest “R” rated movie opening ever was 300, which was another comic book movie directed by Zack Snyder. Because of 300, Zack Snyder has a huge fan base that will turn out opening weekend. Also, while 300 had a decent size pre-existing fan base, the Watchmen has a huge pre-existing fan base. DC Comics printed around a million copies of the Watchmen graphic novel in 2008 in order to meet demand. A large segment of the millions of people who either read the original Watchmen comic book or one of the graphic novel reprints will rush to see the Watchmen movie in the opening weekend. Another huge positive for the Watchmen movie is that it has virtually no competition at the box office this weekend. The Watchmen movie is going up against a Jonas Brothers concert movie that has flopped, a bunch of films nominated for a Best Picture Oscar that no one cares about seeing, and Tyler Perry playing an elderly black woman going to jail. Tyler Perry’s Madea Goes to Jail is actually the Watchmen’s toughest competition, and that movie will be in its third week of release. Another thing working against the Watchmen movie is that there have been a couple of negative reviews by some well known entertainment magazines such as Variety and the Hollywood Reporter. However, 300 also received quite a few negative reviews, and it performed well above expectations at the box office. 300 had a fantastic movie trailer, and the Watchmen has a fantastic movie trailer. A lot of people will not even bother to read or be influenced by reviews and will be driven into theaters by the trailer alone. So here is our prediction. The negative reviews circulating about Watchmen will not affect the opening. Comic book fans, Zack Snyder fans, and people impressed by the trailer will turn out in droves for the movie. The movie will be huge in IMAX theaters, possible setting a new record. The Watchmen has a shot at $100 million, but it’s likely out of range. While many predictions are placing the Watchmen in the $50 to $70 million range, our prediction is that it will exceed expectations and land in the $85 to $95 million range. As far as “R” rated movie opening weekends go, we predict that it will easily beat 300 at $70 million and will likely also knock off The Passion of Christ at $83 million. The Matrix Reloaded at $91 million is a much bigger challenge. So think of it this way, the Watchmen could be bigger than Jesus, but still come up short against Keanu Reeves.