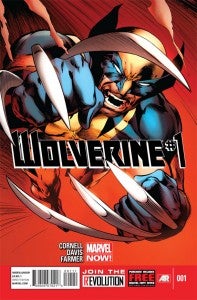 Along with Frank Cho's The Savage Wolverine, this is the second new title announced for the character, who has a movie coming out next summer, as part of Marvel's line-wide Marvel NOW! relaunch initiative.

It's also the first time since 2010 that Cornell has done work for Marvel; the veteran writer has reserved his Big Two efforts for DC and Vertigo in recent years.

Davis, for his part, has been working on Captain America, among other things.

“Wolverine will have to use all of his considerable instincts and skills to track down a seemingly unbeatable adversary unlike anyone — or anything — he's ever faced before," said Axel Alonso, Editor In Chief, Marvel Entertainment. "Paul Cornell and Alan Davis are delivering a globe-spanning, high-octane adventure, chocked full of big budget action and cameos by Marvel's finest super heroes, that will leave readers gasping, and begging for more."

Cornell suggests that the new series will be somewhat more character-driven than we've seen from Logan in a while; for the most part, the hero (who appears monthly in a number of team books as well as at least one of his own titles at any given time) has been focused on big scope, big action events of late.

“This is the series that gets into what makes James Logan tick, that shows him being, as he puts it, ‘a regular guy’, interacting with civilian friends of his in New York City,” said writer Cornell. “The most amazing thing about James is that he's been alive so long, gone through so many extraordinary things, is such a strange being, but holds on—very hard—to being a guy who likes to hang out in bars with good company, who can run a school, who's a decent, civilized man.  Most of the time. No vampire alienation and boredom for him. He's a man of the people. I'm going to poke that and see what happens.”

Wolverine #1 will go on sale in March.

Wolverine #1 Launches With Cornell and Davis From Marvel NOW!