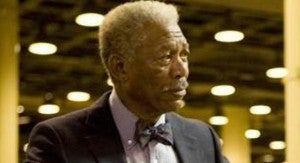 A few days ago, ComicBook.com noted that Chris Claremont and Frank Miller, who wrote the comics upon which The Wolverine was based, never received an onscreen credit for their involvement with the characters.

Neither did Len Wein, who created the character at the center of the film--in fact, he told the L.A. Times, he hadn't received a credit, or any significant revenue, from any of the Marvel films based on characters he created until the latest one.

Asked whether the lack of credit for the X-Men films was a source of frustrating for the veteran writer/editor, Wein told Hero Complex, "Yes, of course it is. It’s less frustrating for the characters I created at DC. Money comes with the anonymity, at least. I have contracts that guarantee me some small piece of the action. Lucius Fox has earned me a great deal more money than Wolverine ever has, although I will say that for the latest film Marvel did send me a nice check."

Lucius Fox, of course, first appeared on screen in the '90s as part of Batman: The Animated Series. The character, co-created by Wein and artist John Calnan in 1979, has gone on to appear in a number of TV series, films and video games, most notably Christopher Nolan's Dark Knight Trilogy, in which he was played by Morgan Freeman.

On a lighter note, the veteran writer noted that he had at one point--unintentionally--made Wolverine seem Australian long before Hugh Jackman came around.

"The weird thing was, I actually did a lousy Canadian accent. I thought he ended up sounding more Australian in that first story," Wein said of the character's creation. "The irony of that is so amazing to me."