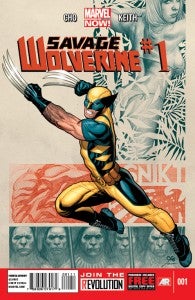 As was widely expected, Marvel has confirmed that their "Savage" teaser which promised a new Marvel NOW! title coming in January was for Frank Cho's take on Wolverine, titled (of course) Savage Wolverine.

The title, which has long been rumored over at Bleeding Cool, is one of the least surprising of Marvel's surprise reveals, given the fact that the one-word teaser released by the publisher had a trio of slash marks through the word, Wolverine's customary way of inflicting damage.

Mutantkind's favorite Canuck will reportedly wake up in the Savage Land, with no idea how he got there and only Shanna the She-Devil to guide him. That'll suit Cho's trademark artistic style, with its--ahem--focus on female anatomy.

“Frank Cho’s ‘Savage Wolverine’ is adrenaline-fueled eye candy," said Axel Alonso, Editor In Chief, Marvel Entertainment. "Plopped down in the middle of the Savage Land, Logan will have to carve a path to freedom through a maze of none-too-friendly cavemen, hungry dinosaurs and threats so surprising only Frank could have thought of them.  If you’ve been itching for a cover-to-cover action series that proves that Logan is, indeed, the best at what he does, with cameos by a surprising array of Marvel Universe characters, this is the series you’ve been waiting for."

“The story takes place in the forbidden area of the Savage Land where an evil ancient god slumbers. Wolverine and others accidently unleash it, while trying to get back home.” Cho said. “This isn't just a solo Wolverine story. It's actually a team-up story with Shanna the She-Devil. Both Wolverine and Shanna have similar assertive personalities. The story is not just a quest to get home, it's a story about surviving each other's company and the Savage Land…it gets pretty bloody and savage... in a good way”

As with most of the Marvel NOW! titles, Savage Wolverine will hit the stands at $3.99, and each copy will come with a free code for a digital download.

Wolverine is Savage in Marvel NOW!