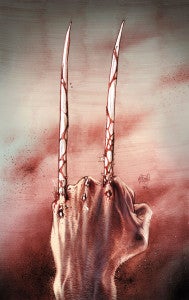 Kieron Gillen and Adam Kubert are set to produce a sequel to the best-selling Wolverine: Origin miniseries, Marvel announced at Comic Con this weekend. They've provided a first look at the cover at right. The new miniseries will launch in November.

Wolverine: Origin II is set a few years after the events of ORIGIN finds James Howlett running with the wolves…until something unexpected brings him back into the world of men! Follow the first “X-Man” as he finds his way back to civilization and falls afoul of someone Sinister, who’s just discovering mutantkind and the horrors he can visit on them.

"When we last saw Logan at the end of Origin, he was broken—barely straddling the line between man and animal," said Gillen, who will write the sequel to Paul Jenkins, Joe Quesada and Bill Jemas's original. "But how did he transform himself from a wild recluse and into the groomed warrior he is today? That was always been a transformation I’ve wanted to explore."

"You don’t play it safe when it comes to Wolverine’s sketchy past," said editor Jeanine Schaefer. "That’s why we’ve brought out the big guns—Kieron Gillen and Adam Kubert—to give Logan the superstar treatment he deserves."

You can check out the solicitation information below.