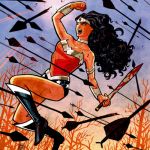 The next of the "big three" of the DCU sees their new solo release this week, with Wonder Woman #1 arriving the same week as Batman #1. With things in Gotham going well so far, how does this new installment of the Amazon princess fare? For those who have been keeping score over the past few years, Diana has seen her story directions change frequent hands with a varied cast of writers as well as a pastiche of adventures mining classic mythology, Washington D.C., her own well-known villains such as Cheetah, and the creation of a savage villain in Genocide, all culminating in the recently concluded "Odyssey" storyline. For many, this relaunch may come as a relief to those who were maybe displeased with the previous series' direction. This opening issue, penned by noted industry writer Brian Azzarello, hits some familiar notes from George Perez's storied run on the series in the 1980s, which saw an extensive use of Wonder Woman's Greek mythological roots in its storytelling. One difference in this case is the fact that Wonder Woman doesn't appear to have as large a starring role in her maiden issue as would be expected.Right away the ongoing mix of ancient myth and the modern world are introduced, with one of Zeus' many offspring "entertaining" a group of young women in Singapore, which eventually ends with a less than amusing conclusion for them. The focus then quickly shifts to Virginia, and a rural farm where several disturbing events occur, with two strange horse/human hybrids (Centaurs, perhaps?) emerge from some brutally killed animals. Hermes quickly shows up to warn the resident of the farm about trouble on the way, and more globetrotting ensues, this time to London, where none other than Diana, Wonder Woman herself, is sleeping. Hard to say at this time if the world-wide span is going to play into some other major point later on in the story arc, but it was a striking detail that was woven into the story. The woman shows Diana a mysterious key given to her by Hermes that transported her to safety, and with that, Diana and the woman return to Virginia to confront the warlike creatures.

It's interesting that Wonder Woman doesn't play as obvious a role in this opening issue as her fellow solo series stars have, but as with previous arcs, Wonder Woman has always sported a large supporting cast. That might work in future issues, but it seems a bit out of place for a relaunch of an iconic figure. When she is featured, there's a warlike quality to her character that goes along with a very sharp, austere quality to the artwork supplied by Cliff Chiang. Featuring swords, scythes, arrows and more, the heavy use of bold lines, angles and movement in the artwork supports this story, which alludes to a divisive and harsh battle on the horizon for not only Zola, the woman saved by Wonder Woman, but for the Amazon herself. The issue does a good job of setting a clear tone for the series and how Wonder Woman might see parts of herself in her life on Earth in "man's world", but it could have benefited a bit more from her presence throughout. The story though is a solid nod to Wonder Woman's past with a contemporary look to the future. Grade: A-

Wonder Woman #1 Review: A More Aggressive Return to the Classics