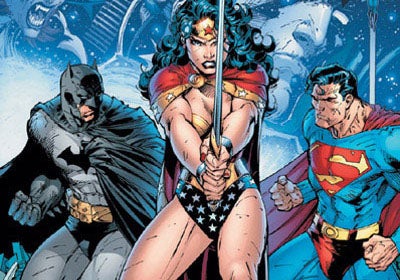 Telling his audience that her involvement in the film will likely be of the "brief appearance to set up a sequel" variety, Hughes speculates that the presence of DC's complete Trinity could help the movie sail past $1 billion, putting it about on par with projections for Avengers: Age of Ultron.

"Warner Bros. isn’t merely in the superhero film business, so they don’t really need to — nor should they be expected to — match Marvel’s level of output for the superhero genre," Hughes wrote. "But Wonder Woman’s inclusion will be a good start to building a more impressive presence for the DC universe on film. And no doubt, it’ll be highly lucrative as well."

He suggests that, in addition to a Trinity film, it's likely that each of the three would be featured in their own movies before an eventual Justice League picture.

Hughes also tweeted from Comikaze last weekend that he had heard rumors Ben Affleck might be in line to direct both a Batman solo film and a Justice League movie after Batman vs. Superman.

There had been a Wonder Woman TV series in development at The CW, titled Amazon--it was recently put on hold indefinitely, with the explanation given that Warner Bros. was looking for the perfect fit for the character and that she's a difficult one to get just right. Warner Bros. Television has, in the past, been resistant to characters appearing on both television and film at the same time, though, so one has to wonder whether there might be a connection there...!