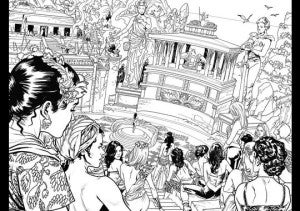 Not long ago, Grant Morrison shared some early details and first-look art for his upcoming project Wonder Woman Earth One. Saying that researching history and feminism for the story returned him to his "alternative roots," the star comics writer described the character as perpetually "on trial."

“I always felt one of the fundamentals of Wonder Woman in at least the last two decades is that she always seems to be on trial, and I don’t mean that in a story sense,” Morrison explained. “Everyone’s always saying, ‘Why does nobody buy Wonder Woman? Why isn’t she any good?’ (Laughs) it seems like she’s always on trial, so I thought if I literalized that and made the story basically the Amazons bringing her back home after her first adventure away and putting her on trial, it’d be different from anything else you might see. The Amazons have their own ways of doing things.”

That trial is such a key part of the story that now, Morrison says it has overtaken the title of the book. Appearing on Kevin Smith's Fat Man on Batman podcast, the writer said that the story will be titled Wonder Woman: The Trial of Diana Prince. While it will still be part of DC's Earth One line, then, it appears (unless CBR is misunderstanding) to be the first book in that line to be released with a story-specific subtitle (rather than just "Earth One Volume XX").

Saying that his version of the story won't have a Wonder Woman formed by clay (it was "creepy" and made her "too remote"), it will revolve around the fallout from her first meeting with Steve Trevor.

Wonder Woman Earth One Retitled, Will be Released as The Trial Of Diana Prince