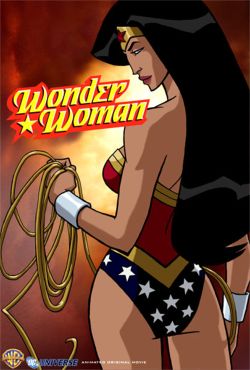 One of DC's strengths in the past few years has been the quality of their animated productions, both of the feature-length and TV show kind. The latest entry in the series comes in the form of the straight-to-DVD Wonder Woman, a film based loosely in the George Perez stories early in the series relaunch of the late 1980's.

The film opens with a surprisingly brutal battle, set centuries in the past, as the Amazons find themselves locked in combat with the forces of Ares, former lover of Queen Hippolyta. Beheadings, stabbings and allusions to Ares' lack of prowess in the bedroom are all present in this scene, and the harsh reds, browns and yellows paint a savage landscape on which the battle is raged. To say that this film is not for children under the age of 12 would be a fair statement. I was a bit taken aback by these earlier images and the tone of the piece, but it worked beautifully in the larger context of the film, and anything less would have felt like cheating. The battle ends with Ares' imprisonment on Themyscira, with only another god able to release him from his shackles and Hippolyta vowing never to interact with man again, for fear of a repeat of this result.

The story flashes forward to the present to find Steve Trevor, brash flyboy, crash landing his plane on the island of Themyscira. In an interesting turn of events, the film pits young princess Diana against the intruder Trevor in a pretty intense battle. He's quickly subdued and captured.

One thing that makes the film work so well is its use of humor in just the right places, such as the following scene where the lasso of truth is used to determine the threat level posed by this man, a man from a world Hippolyta has sworn her people from interacting with. Trevor is exposed as a chauvinist, ogling Diana's "rack" as he calls it, but confessing that he is no threat to their people, his crash landing a mere accident.

The traditional contest of the Amazons follows, and even though Diana is forbidden to participate, as in her comic book origin story, she does anyway and wins the title of emissary to the world of man, given the job of transporting Trevor back to his world. Even in these scenes, the action in the contest is swift, pulse pounding and intense, and the awkward banter between Steve Trevor and Artemis, an Amazon, is quite clever.

Adding to the tension is the escape of Ares during the contest, due to an interesting subplot that involves some secondary Amazonian characters. Diana follows Ares' trail to New York City, taking Trevor back to his people, her journey to man's world now extended with this new mission.

The film starts to delve into exploring the complicated relationships of men and women's roles, and it does so without seeming heavy-handed or clich . There's a great scene with Etta Candy as she attempts to flirt with Steve Trevor, only to have Diana ask her "what's wrong with you" and then demonstrate her physical strength in performing the task Etta had flirtingly asked Steve to perform. The scene where Steve attempts to drink Diana under the table is also quite amusing and furthers the examination of these societal issues while also allowing Diana to reveal a bit more about her people to Steve and the viewer.

A battle with some street thugs and shortly thereafter Deimos, a flunky of Ares, sends Steve and Diana to look for Ares in a secret gate to the underworld, where Ares attempts to contact Hades to remove his bonds. Diana is injured and a slightly annoying scene takes place where she is shown recovering in a hospital. She recovers, chastises Steve for saving her and not stopping Ares, and they're off again.

Ares has summoned his army to the highly symbolic Washington, D.C. area in order to carry out his plan of world destruction. The battle scenes in DC between his army and the Amazons, who show up to assist, are again stunning and never dull. DC's destruction is beautifully rendered; every frame used to convey some interesting element of battle or conflict that shows the scale of the war being raged.

Several secondary Amazons get a chance to shine and have their subplots resolved in these scenes, Artemis and Alexa among them, and Steve even gets to prove himself a hero to Themyscira when he succeeds in stopping a missile launched by the United States, a detail not lost on Ares, who uses it to make a point about the power modern warfare gives his psychic abilities to feed on fear and anger.

The film of course concludes with Ares' stunning defeat and order being restored to the world. Diana has found her place with Steve in man's world, and the movie ends with, hopefully, a peek at a certain feline femme fatale, known for her clashes with Wonder Woman, a name given to Diana by a girl on the street.

TV's Keri Russell (Felicity) is a surprising delight as the titular Amazonian princess. In fact, all of the voice actors in this feature fit perfectly. Alfred Molina has the perfect gravity to play Ares, god of war, and his experience as Doctor Octopus in Spider-Man 2 certainly helps his comic book credibility. Veteran TV actor Nathan Fillion (Buffy) is great as the overly macho Steve Trevor, who never loses a sense of simple humanity in the face of all these gods and supernatural figures. The characterization of Hippolyta makes sense, with her icy demeanor towards the world of mortal men being used as both a blessing and a possible curse in the film.

The plot is paced perfectly, the humor adds just the right amount of banter and reality to a story involving Greek myth and its collision with everyday humans. What is most impressive and appreciated are the action sequences and the feeling that nothing is wasted here, not even the long battle over DC for the soul of the world. Wonder Woman is only 75 minutes in length, but the sense of epic grandeur and rich storytelling will make you wish this were a tale without end.