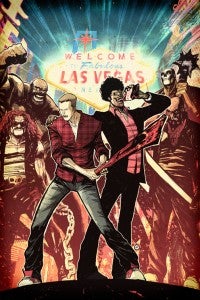 Earlier today at WonderCon, Dark Horse Comics announced Blood Brothers, a new miniseries by writers Mike Gagerman and Andrew Waller which is already set up at MGM as a major motion picture.

With interiors by Evan Shaner and covers by Juan Doe, the series is described as a "vampire buddy action" tale.

“Our goal with Blood Brothers was to create a comic with the feel of a classic buddy action comedy, like Lethal Weapon or Rush Hour, but with two vampires as the heroes,” said Andrew Waller. “It’s really a story about two regular guys, who just happen to be vampires. They’ve treated the last millennium like a thousand-year bender, but now find themselves having to save humanity just to keep the party going.”

Mike Gagerman and Andrew Waller are writers who have been friends for twenty-five years. Their Black List screenplay Search Party, about two best friends who set off on a road trip to save their roommate, who is lost and naked on a road in Mexico, is shooting this summer for Universal.

All The Restaurants Open on Thanksgiving

X of Swords: Who Lived and Who Died in the Crossover?