Crowdfunding is playing an integral part in the independent comics scene. Projects that would never get the support of a bigger publisher are now a possibility along with the dreams of anyone who ever sat in their room, doodling or typing away at the adventures of their own characters. Heck, it's even playing a role in the game plans of established companies. It's a great way for fans to interact and be a part of something they love. There are a couple of well-known platforms to crowdfund on. If choosing these platforms, the full sum of donations does not go to the team behind the campaign, as there are fees tacked on. There is a shining light in the crowdfunding see, however, in the form of Wonderfunders. The community with a focus on teamwork and making connections offers free crowdfunding and other services to its members. Co-founder James Lynch chatted with me to drop some knowledge and hopefully entice fledgling creators to become part of and help make something great.

Can you tell us about how Wonderfunders got started?

Sure. Many folks are aware of the Facebook group Connecting Comic Book Writers and Artists. Myself, Phil Woodward, and Robert Garret were members. Back in June of 2011 Phil, Robert and I were talking about crowdfunding and how expensive it was to use. We decided to try and figure out a way to offer crowdfunding at no cost to indie comics creators

We had a brainstorming session. I came up with the name Wonderfunders. After the three of us decided that was the best name I bought the domain and formed the FB group

And anyone can join up?

Yes, but we prefer people actively involved in creating sequential art. We are not really a fanboy site.

What are some of the services Wonderfunders provides to its members?

Well, we offer free classifieds, a free to use funding platform, an industry directory, Escrow services to take the risk out of collaboration, a files area with educational content and contract templates, a forum, Jams, monthly general membership open mic sessions, collaborative team building, and whatever else presents itself as beneficial to the membership. We hope to offer group insurance and other benefits to our membership at some point. Membership is free by the way. We also offer through jam participation the opportunity to get published credits

What kind of projects has the group produced so far?

On the web we have completed "Captain Curmudgeon And The Cheese of Retribution" and have now published 2 Anthologies with the third one almost ready. I am very proud that between the first two anthologies we have contributors from 5 continents.

Anthony Ball has been instrumental in the production of the anthologies.

What kind of stories are available in the anthologies?

The only real answer would be "a variety." There is one overriding similarity. PG-13 is the cap.

The currently running Dream Team Project seems like a dream come true to aspiring creators. Can you tell us the basics and how it came about?

I have to thank Mindy Lopkin for that. I had decided to help someone who had been asking the whole internet community for help getting his project off the ground. I enlisted the aid of some other folks to produce a page, they produced the work for less than they would have charged as a favor to me. The general consensus among the talented people I brought in was that the writer i was trying to help was unprepared to take advantage of the help arranged. Mindy suggested that in future that help should be awarded to those who were ready to prove that they were deserving. To figure out who was most deserving would be tricky! In the end The Wonderfunders Steering Committee, a panel of advisors that is constantly changing, approved the contest concept.

Tell us about the team you've assembled so far. We can skip the writer, because that guy is a hack, and you can tell him I said that.

Well other than the writer we have Steven "Sash" Scott. Sash is a powerhouse penciller, and a reliable and prolific supporter of Wonderfunders. I should mention that all phases of the contest have been anonymously decided. Our inker is Jason Sylvester, who recently made the best seller list in Canada as the illustrator of "You Know You Are From Saskatchewan if.” Our Colorist is Arthur Gibson, creator of the web comic "Sticks and Stone" which ironically is in black and White, and our lettering search will end on December 15th when submissions are due.

So what is the gameplan for the release of the finished book?

The next phase of the process is to bring the five completed pages produced by the contest to the funding platform to raise funds to complete the book and print it. I am personally guaranteeing the prizes to the participants, but any funding we can raise will help expedite the process.

So far the cost to Wonderfunders for the Dream Team Search has been $860 with about $2,620.00 left to spend to bring the winning team's dream to fruition. So far we have sold 14 copies of either Wonderfunders Anthology Volume 1 or 2. Net intake after costs is 1.56 per issue or 21.84 total. I am proud to help subsidize the effort, but I am not too proud to ask our little community and the extended community for that matter for help. If anyone wants to help us they can buy and promote the Wonderfunders Anthologies which are available on Indyplanet and help bring the first of our community's big projects to life.

You all have also been working on a calendar project. Will that be completed in time for holiday shoppers looking to contribute to the group?

We are running out of time on that, but I am doing what I can. Because we work by donation for both submitted work and operating 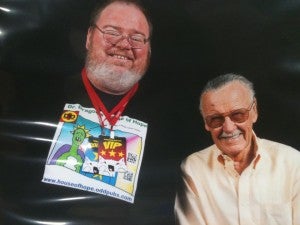 costs it is harder to "demand" timely completion than if I were cracking the whip as an editor who was paying. Worst case scenario is that the 2014 Calendar is almost done.

What kind of projects are planned for 2013?

We will be running more jams, but with stricter deadlines. We will be trying to put together some gang printing deals to help get our members access to lower print run costs. We will offer the Anthologies to the members at cost so they can feature them at cons. We may also repeat the dream team search

The project list is far longer than our budgetary realities.

Speaking of cons, what kind of presence is the group going to try and have with the new year of events starting up?

At the Moment I will be attending The Albuquerque ACE show and hopefully the Denver and El Paso cons. Our work will also travel the southwest a bit with 7000 BC of which I am also a member.

How do you plan on increasing Wonderfunders' presence on the internet to become the #1 Crowdfunding Source for aspiring comic creators?

The honest answer is that I am not sure how we would do that other than by grass roots methods. We have been pursuing grants, but so far we have not been successful. I have priced a fully integrated platform and first year commitment is a little over 100K. We have something to offer that the others don't though. We are 100% free to use.

People have the wrong idea about crowdfunding. The platform is not the medium. It is the collection system. Do you know anyone who cruises Kickstarter or Indiegogo looking for something to fund?

It doesn't work that way at all. You must drive the traffic to your funding page. This is an extensively covered topic on our group.

The thing that many talented and smart people most often miss when seeking crowdfunding is that just listing your project on any platform (big like Kickstarter and Indiegogo, or small like Wonderfunders) is that the listing itself is not the way to "raise" the funds. The listing on the platform is simply the place where

YOU MUST DRIVE THE TRAFFIC.

Sorry for shouting that, but it is important that anyone looking to crowdfund a project understands that the listing is the just destination and not the marketing to get folks there. The page should be designed to "close the deal" with great perks, a compelling presentation, and a call to action.

One of Wonderfunders co-founders, Phil Woodward, was very forthcoming about the methodology of running a successful crowdfunding campaign. Although Phil no longer participates here for certain disparities of vision for Wonderfunders path going forward that arose between us, I would still like to share some of that great information Phil researched with the intention of benefitting our members.

The big lesson Phil taught me about crowdfunding was about the tiers of marketing your campaign to success. The tiers concept is pretty powerful. I have customized it some presenting it here, but credit where credit is due.

Tier 1 should be the "Gimmes" i.e. Close friends and relatives of all the people working on a project. If you have a writer, penciller, inker, colorist, and letterer, you have all of those peoples' tier one connections to market to. If your co-creators aren't behind your project and willing to help get it funded by asking those who are most likely to support your efforts and theirs, get a new team.

Tier 2 are the friends and relatives of close friends outside the production team members' own circle. For these folks the proposal and work must be really good to get them on board.

Tier 3 are fans of any of the production team members' previous work that may be reached and asked to support new work.

Tier 4 are the friends and associates of those fans.

Tier 5 is the general indie comics supporting public (but how to get to them? Read on.)

Tier 7 almost free marketing like visiting local comic shops and cons with flyers etc. If your team is geographically diverse that could be 10-20 comic shops and 5-10 cons.

Tier 8 Other stuff I haven't thought of.

Tier 9 Paid advertising to drive traffic to the site.

Anyway, these are a few of my thoughts on the subject...so far!

What do you think of teams from established publishers with mainstream presence using crowdfunding for projects?

I think it shows that those of us who are less well known had better not turn our noses up to it.

Crowdfunding allows projects that might not otherwise see the light of day get a chance to live. If they are worthy and well marketed they will thrive. If not the public can clearly send the message that a project is not funding worthy.

Are there any independent projects that you would recommend to someone looking for something different?

Sure, mine. Haha. I just ordered a Mac and Trouble. I have been avidly awaiting Disco Frankenstein. I just read and really liked The Sixth Gun.

I also bought Indestructible Hulk and was pleased.

Not indie, I know, but I watch PBS and sitcoms.

Any last words you'd like to say to our readers?

We are the myth makers of our age. It is important that we have the chance to tell new tales in new ways. Digital is the future, but I hope the printed comic stays with us. I like the idea that my great-great grandkids will have the opportunity to enjoy one of life's rarer pleasures. To curl up with a good comic book and transcend the mundane. To have ideas of possibilities and illustrations of the values of truth, justice and, well you know.