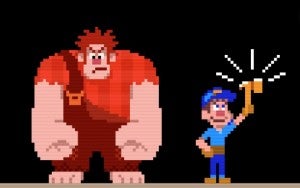 Fans looking forward to the upcoming release of Disney's Wreck-It Ralph in theaters this November, now have an opportunity to play Fix-It Felix, Jr., an 8-bit video game claiming to be the original, 1980s source of Ralph's character, for free at the movie's official website.

Dated 1982 and with a copyright assigned to "Tobikomi Co.", it's reportedly the same game that will be made available as an arcade cabinet game later this year and will be available for play in arcades and movie theater lobbies in time for the movie's release.

In the game, you play Felix, and attempt to repair the damage done by Ralph, a giant, angry man who just runs through the screen smashing things and then throwing stuff at Felix in hopes of killing him. It's a basic, single-screen game a la Rampage, but with a hero who looks like Mario instead of Godzilla.

The game is a great tie-in product for the movie, and it's nice to see them really committing to the 8-bit version; expect, though, a fully-rendered and slickly-animated game to hit stores come the holidays if it starts to look like Wreck-It Ralph will be a hit in the theaters.