Wrestling fans are on the edge of their seats in anticipation for this Sunday’s WWE annual Hell in a Cell event (live on the WWE Network - for just $9.99). With two main event matches inside the monstrous Cell, John Cena vs. Randy Orton and Dean Ambrose vs. Seth Rollins, we asked a certain WWE Diva’s Champion when we’d see her inside the demonic structure.

Just yesterday I had the chance to speak with AJ Lee about one day putting the title on the line inside the Cell and who'd she want to be against when she does so. From there we jumped into her love of comics, where the namesake for her finisher came from and so much more. Want to know what classic comics rivalry she sees herself currently in? Find out below!

AJ, You’ve been a part of your fair share of Pay Per Views. For you, what it is about them that gets you excited for each one, and Hell In A Cell in particular?

I think the really cool thing is, especially for this one is that I spent a year talking crap about EVERYONE and in a way, proving myself right. Nobody could take that title off me, ya know? Even the English Muffin, Paige.

But look, she proved me wrong! She’s shown that she’s a strong competitor and there's nothing more that you could want as an entertainer in this business then to have someone who can keep up! Going into Hell In A Cell this weekend, it’s a little scary because she’s pinned me on more than one occasion, so who knows what will happen on Sunday.

What is it about the Diva’s title that means so much to you. Obviously it’s great to be champion, but what does it mean beyond that?

Well for one, I have the date I won it the first time tattooed on the back of my neck. I say that because it’s not just for the championship itself, but it marked the end of a 14 year, life long goal to make it in the WWE. It marked the opportunity for me to prove myself as the best woman in the company, despite being everything people think of when it came to their idea of what a woman champion should be in this business.

I got the tattoo because I was proud of staying myself, being different, going against the grain AND being the champ.

This weekend’s title match has not one, but two girls who are VERY different, and people are picking a side is phenomenal. I like to call Paige and I “Wonderful Little Weirdos.” It just shows how far we’ve evolved as Divas in general.

Are you just itching to get your own match, in the Cell itself?

OH MY GOD, I wish! It would be so amazing.

The other week on Raw, they had the Cell assembled outside of the ring. So Paige and I were walking around it thinking, “just give us three minutes in here.”

Trust me, Paige and I are kind of insane,and we’re doing our best to convince people. We’d love it, but I don’t know if everyone is ready for that yet. 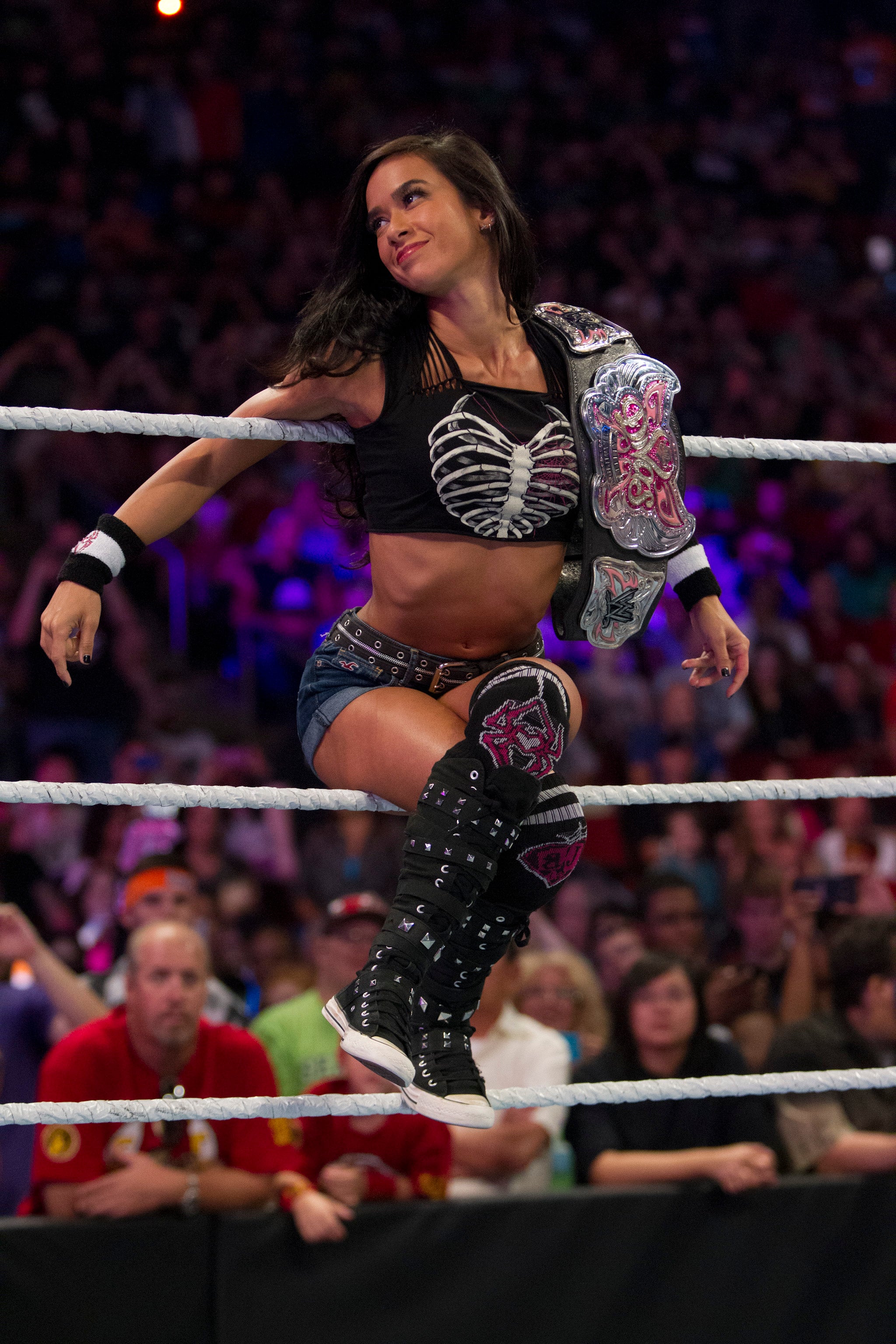 Okay, so lets get nerdy. It’s pretty well known that you’re a BIG comics fan. If you were to compare your rivalry against Paige with any rivalry in comics, what would it be?

HA! What I get a lot from fans, is that our feud is very much like Batman and Joker. I think its really interesting because we go back and forth on who is Batman and who is Joker. After Wrestlemania you had Paige, the hero in all black leather, stopping maniacal AJ which was perfect.

But as time went on you couldn’t tell who had more screws loose. The fundamentals are there though. Every hero is as good as their best villain and when you have two on the top of their game able to switch back and forth just goes to show how great rivalries can be.

And I mean come on, to be compared to the most widely known hero/villain rivalry ever? I’ll take it.

If there is anyone out there who says Batman doesn’t have a few screws loose himself, they’re thinking of the wrong hero.

You mentioned that your character has undergone a number of changes since debuting in the WWE. Has your evolution been methodical or has it been more you adapting to the situations you’re put in?

It’s interesting you know? “Continuity” isn’t something that has always been around in wrestling like it has in comics. I’ve gotten really lucky that I’ve been able to jump from story arc to story arc with the “AJ” character and really grow her. She started out as someone who was always being taken advantage of that broke her mentally and emotionally, to her breaking out from that with revenge on her mind, then turning evil, and now where she’s trying to redeem herself.

She’s bringing all that same crazy and evil, but it’s more focused like a laser now. If nobody could stop her when she was all over the place, how is someone going to stop her when she’s so focused on winning now?

The fact that it’s all made sense, and the story behind her has connected so well has helped me be a better performer. I love being able to draw on all her back-story and take it to the next level and I think my fans have caught on to that.

Your finisher is the “Black Widow,” might that be named after a certain Avengers heroine?

There were actually some points during the merchandise creative process where I tried to get skulls on my mercy, but we couldn’t do that and we ended up with the spider. But nobody had put 2 + 2 together that it was a Black Widow spider. I think it was on Smackdown where I had actually said the phrase out loud. I did it as a little pop and shout out to my friend Arune [Singh, Executive Director of TV Communications] at Marvel. We were talking on Twitter about it and it took off from there.

But it makes sense, right? I mean the character is such a kick ass heroine. She’s dark and twisted and nobody messes with her.

Taking it back to the merchandise though, I thought it was perfect because it goes so well with my move. It looks like someone got caught in a spider’s web and eventually, submits!

It’s my comic book shout out! 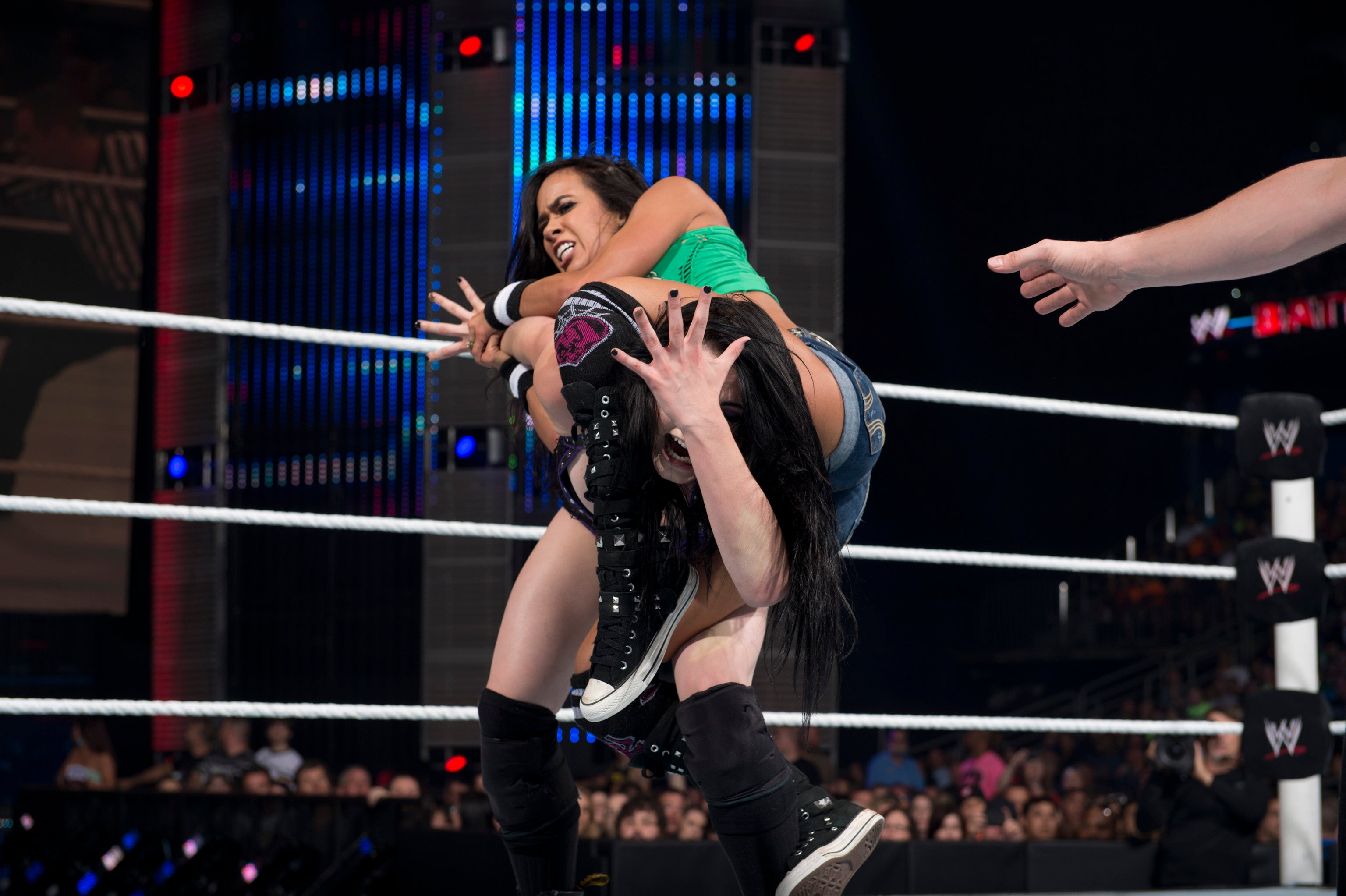 Alright, last question before I let you go. The new Avengers: Age Of Ultron trailer is out, have you seen it.

I HAVEN’T. Someone in my household was watching it and I heard bits and pieces of it, but its my #1 goal after I’m done with this. I’m super excited for the movie.

WWE's Hell in a Cell happens live on the WWE Network (and PPV) on Sunday, October 26th.