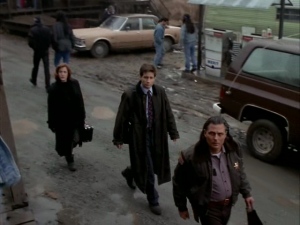 David Duchovny should start a coin jar to pick up all the pennies and nickels he'll be getting from home video residuals, as both The X-Files and Twin Peaks are reportedly coming to Blu-Ray late this year or early next. The Digital Bits have the details, where they say that in spite of no firm announcement during San Diego Comic Con International last week (where there was a twentieth anniversary panel), Fox is working to get The X-Files prepped for a 2013 release to capitalize on twenty years of the cult hit and all the attendant publicity and fan goodwill that such an event brings with it. They also say that Twin Peaks, the show's kind of spiritual predecessor and a series on which The X-Files's Duchovny played one of his most memorable roles (as a transgender FBI agent), is being prepped for release at CBS. In this instance, there's already a pretty good complete-series box set available in the Twin Peaks Gold Box, but the feature film Twin Peaks: Fire Walk With Me was never included, and since that film is  a big part of the show's continuity, many fans always wanted the whole thing collected in one place. Rumors have been persistent that a Fire Walk With Me Blu-Ray would include would likely include deleted scenes and other special features previously not available on the U.S. version of the DVD, as well as other previously-unseen materials pertaining to the film. Not long ago, series co-creator Mark Frost confirmed that last bit of speculation, at least inasmuch as that was the plan at the time.