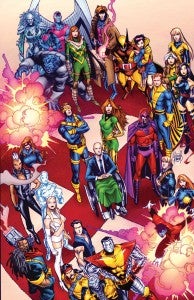 According to new solicitation information made available by Marvel Comics, February's X-Men #41 will be the final issue of the title, although its principal cast appears to be largely gearing up for a run in a new title, most likely set for a March launch.

Adam Kubert provides a throwback cover that hearkens to the early days of an adjectiveless X-Men title, the blockbuster 1991 X-Men #1 by Chris Claremont and Jim Lee that popularized variant covers and became the best-selling single-issue comic book of all time with more than 8 million units sold.

In the issue, Storm and Angel apparently struggle for leadership as one version of the team disbands and they begin recruiting for the next. Smart money is on Angel getting his own team to lead in the Marvel NOW! relaunch, if only because he's a founding member of the team and it's been a good, long time before he played a role befitting that. Storm's term as team leader over the years has been largely memorable only because there was an African-American woman leading the team; putting her in charge of the others hasn't really resulted in a ton of stories (excepting the obvious one where she fought Cyclops to get the job in the first place).

X-MEN #41 SETH PECK (W) • JEFTE PALO (A) Cover by ADAM KUBERT Final Issue Variant by DALE KEOWN • FINAL ISSUE! • At the end of an era, Storm puts a team together to search for the start of the next. • In the field, will Angel challenge her for leadership? 32 PGS./Rated T+ …$3.99