One of the things that seems to have slipped below the radar during Bryan Singer's Twitter chat on X-Men: Days of Future Past is that he gave the name of a mutant never before known to be featured in the film.

Asked which new X-Men will be featured in the film, Singer said "a lot," listing off a number of previously-confirmed new characters...and Ink.

Most casual fans might not even be aware of the character, who first appeared in Arrow Executive Producer Marc Guggenheim's run on Young X-Men; he's not quite as out-of-left-field a choice as X-Men: First Class made with Azazel, but certainly there weren't a lot of people expecting new mutants to be confirmed during the Twitter chat, let alone one without a log of brand recognition.

For those uninitiated, Ink doesn't actually have his own powers but is granted powers by tattoos placed on him by a mutant tattoo artist. It's a bit like DC Comics's Tattooed Man, except instead of his tattoos coming to literal life and leaving his body, they are emblematic of the type of powers they grant him.

While the character had never been confirmed before, a reader e-mailed in to let us know that you can see a character who appears to be Ink behind Havok in the promotional photo below. 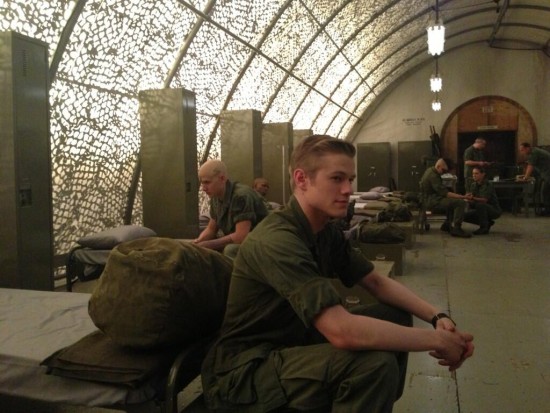 Here's a rundown of what he's got, courtesy Wikipedia, but of course many of these are tied in with comic book backstory and may not appear onscreen:

That last one might turn out to be particularly significant, if kept, considering that Brett Ratner's X-Men: The Last Stand killed off Jean Grey and there's no other Phoenix yet in the X-Men film canon.