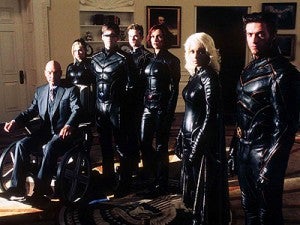 In a fairly unequivocal statement that he's going to break with the look of his previous X-Men films, filmmaker Bryan Singer took to Twitter late last night to tell his followers, "For those of you wondering...no leather suits."

Since Louise Mingenbach, who designed the black leather outfits used in Singer's first two X-Men outings, had already been announced as returning, many fans were wondering whether that meant Singer would abandon the visual aesthetic of X-Men: First Class, to which his film is a sequel, in favor of the look he established on X-Men and X2: X-Men United.

The rumor that a number of actors from Singer's X-Men films would reprise their roles in "flash-forwards" during the time-traveling Days of Future Past arguably gave some support to the position that everything old would be new again.

Of course, it looks as though the leather suits have been abandoned even in the "future," as we haven't seen a single shot of Hugh Jackman wearing one even while it's been revealed that James Mangold's The Wolverine chronologically follows even X-Men: The Last Stand to be the latest film in the franchise.

X-Men: Days of Future Past Director Singer: "No Leather Suits"