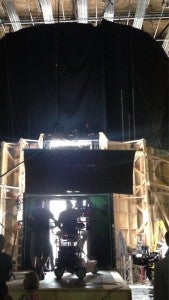 Quicksilver, the super-speedster who will be joining both X-Men: Days of Future Past and Avengers: Age of Ultron, will be shot in 3,600 frames per second, according to a tweet from Bryan Singer, the film's director.

The additional brightness is needed to light the set when shooting in 3,600 FPS, which is about 150 times slower than standard film photography.

Here's the tweet, with a look at the image at right, showing off the "brightest set I've ever filmed on."

While X-Men: Days of Future Past has been in production for a while, it's only recently that we've been teased with any idea of what Quicksilver is set to do--besides a vague promise around the time he was announced that there was a fantastic action scene in his future. Is this it?

Further more, while running faster than light and bending the laws of physics to travel through time has been a stock-in-trade for DC Comics's The Flash for years now, Quicksilver has never had that in his arsenal...but as a key player in a time-travel movie, one has to wonder whether that aspect of super-speed might be explored in this film, which is a not-totally-loyal adaptation of Chris Claremont, John Byrne and Terry Austin's 1980s comic book story by the same name.

X-Men: Days of Future Past: Quicksilver Shot at 3600 FPS...and BRIGHT