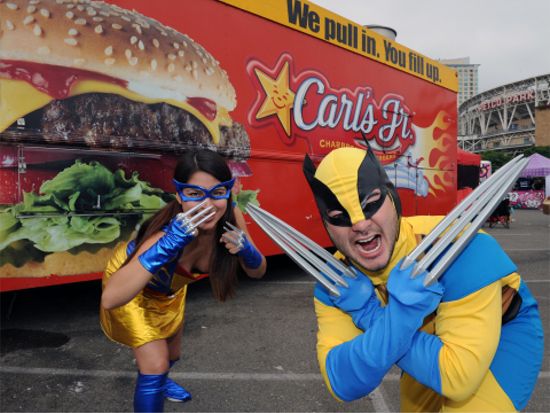 CKE Restaurants Holdings, Inc., which is the parent company of Carl’s Jr. and Hardee’s restaurants, and 20th Century Fox just announced a promotional partnership for the theatrical release of X-Men: Days of Future Past, which is set to arrive in theaters on May 23, 2014. The upcoming promotion includes advertising, in-restaurant merchandising, collectors’ cups and a new film-themed burger.

“Our ‘young, hungry guy’ customers love big super hero films almost as much as they love our big, delicious burgers,” said Brad Haley, chief marketing officer of Carl’s Jr. and Hardee’s. “And, super hero films don’t get any bigger than next year’s X-Men: Days of Future Past with many of the cast of the original X-Men films joining with the cast of X-Men: First Class. Carl’s Jr. and Hardee’s will reveal more details about the partnership, as well as the secret identity of our X-Men-themed burger, in the coming months. But, right now we’re here at Comic-Con’s Interactive Zone to kick-off our partnership with 20th Century Fox by feeding any and all hungry mutants from our Carl’s Jr. ‘Star Diner’ food truck.”

On Saturday, July 20 from 6-8 p.m., Comic-Con attendees dressed as their favorite X-Men character can visit the Carl’s Jr. and Hardee’s Star Diner at Comic-Con’s Interactive Zone to grab a burger or combo, limited-edition Comic-Con tote bag and a personalized, professional photo. Fans who’ve left their X-Men gear at home can receive a complimentary mutant makeover from real Hollywood makeup artists at the Star Diner.

“We couldn’t be more excited to partner with Carl’s Jr. and Hardee’s for our biggest X-Men movie yet, X-Men: Days of Future Past,” said Zachary Eller, senior vice president, marketing partnerships & promotions at 20th Century Fox. “Their fun and irreverent advertising campaigns are a great fit with our film and we couldn’t be more thrilled to join together to feed mutants everywhere!”

X-Men: Days Of Future Past Teams Up With Carl's Jr And Hardee's