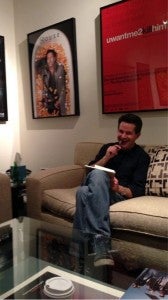 While we were awfully disappointed to hear Matthew Vaughn wouldn’t be directing X-Men: Days of Future Past, we’re really starting to warm up to the idea of having Bryan Singer back in the director’s chair. Even though X-Men: First Class was incredible, X-Men and X2 were actually really good as well.

Plus, it looks like Bryan Singer is really taking an active role in getting the picture moving forward sooner rather than later. Singer has started communicating updates about the movie via Twitter, which is always a good move in helping to win over fanboys.

In his first tweet, Bryan Singer revealed that pre-production had already begun on X-Men: Days of Future Past. Now, Singer has revealed what looks to be the filming location for the movie. Singer tweeted, “Scout went well. Looks like Montreal it is.”

But that’s not all. Singer also tweeted “My office. Late night script session with Simon Kinberg.” Along with the tweet came this picture of Simon Kinberg hard at work on the screenplay. Kinberg seems to be enjoying himself which is a good sign. Hey, is that a picture of the original X-Men cast on the coffee table in front of him. Maybe, it’s there as a little source of inspiration?

X-Men: Days Of Future Past To Film In Montreal