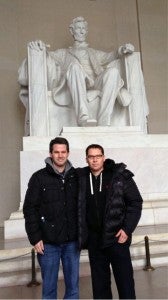 Have you wondered how much the X-Men Days of Future Past movie will follow the comic book storyline upon which it is based? Well, director Bryan Singer has dropped a major hint that at least one major scene from the comic book will make it into the movie.

X-Men: Days of Future Past is scheduled to be released in theaters on July 18, 2014.

X-Men: Days Of Future Past To Film Scenes In Washington, DC