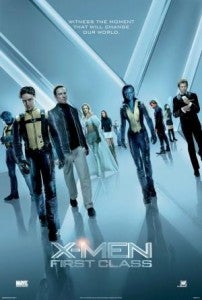 'X-Men: First Class', the reboot of the Marvel comic movie franchise, hits DVD and Blue-Ray shelves September 9th. The film has been a nice surprise at the U.S. box office, earning close to $145 million.

Directed by Matthew Vaughn, the film focuses on a group of youngsters who eventually become X-Men. Led by Charles Xavier (Professor X) and Erik Lensherr (Magneto), the future superheroes work together to stop an evil force determined to destroy the world.

There are a ton of special features with the home release, including 10 Marvel 'X-Men' digital comics, more than two hours of never-before-seen extras, and an eight-part featurette that chronicles the entire film process from pre to post production.