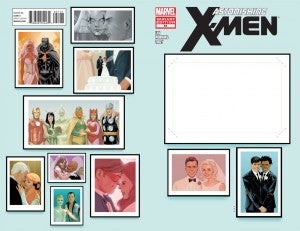 Marvel Comics has released a first look at the "Create-Your-Own-Wedding" variant for Astonishing X-Men #51, the June issue in which Northstar and his fiancee Kyle will tie the knot and the first time a Marvel superhero has been married to a member of the same sex.

While at first it seemed like a "create-your-own" variant might actually be used by retailers to avoid having a same-sex wedding cover on the shelves, that idea is scuttled by the creative "scrapbook" style look of the wraparound cover, featuring a number of Marvel Comics wedding photos, including one of Northstar and Kyle.

Notably absent from the wedding photo montage is Spider-Man and Mary Jane Watson, who were married in the 1980s but whose relationship was not only dissolved but removed from the Marvel Universe's collective memory by Mephisto in the controversial One More Day storyline. Some fans have speculated that One More Day would be undone as part of the "seismic" shift Dan Slott teased for the upcoming Amazing Spider-Man #700. Either way, who wants to bet that the spider-couple will be the most common request for artists to draw onto the cover of this issue?