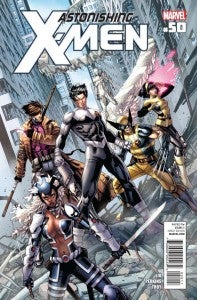 ABC's The View was the venue for Marvel's official announcement that Northstar is the X-Man who will be getting married in next month's Astonishing X-Men #51, and will propose to his boyfriend Kyle in the fiftieth issue of the series, out tomorrow. "That's kind of amazing," Whoopi Goldberg said at the announcement, adding that "when I was a kid and I used to read these magazines, you never saw an array of people," and then indicated a page shown onscreen on which a multicultural group of X-Men characters were watching Northstar and Kyle together. The announcement--which marks the first-ever marriage between a male superhero and another male character in Marvel's hisotry--has been expected for some time, since news and rumor site Bleeding Cool first reported it back in March. Marvel has never commented on the speculation, although between then and now they have made a number of cryptic statements about the story's mainstream media appeal. The cast of The View also took this opportunity to joke about Batman and Robin being a gay couple...which is humorously timed, considering some rumors that have been floating around lately. It may seem to comics fans, in light of the attention DC has been getting this week following their announcement at Kapow! that a character would be reintroduced in the New 52 as a homosexual, that Marvel might be trying to steal their thunder but, if anything, it's the other way around; Marvel has an important issue in the storyline hitting the stands tomorrow, while DC's is still a month away from being revealed, and the announcement in the mainstream media fits in with Marvel's standard operating procedure. Marvel has a history of releasing information like this to the mainstream, non-comics press the day before a story hits comic book stores, and it sometimes causes problems in the direct market, with fans being unable to get their hands on a copy of the comic because collectors or curious bystanders buy the issue after seeing it on the news. This time around (in addition to digital delivery of all Marvel's books, which essentially solves that problem once and for all) there's a little twist--the proposal happens in Astonishing X-Men #50, which is out tomorrow and which will be available "early" at midnight sales tonight around the country. That means that in all likelihood, the wedding itself will sell better because it will have had a month for interest to build, but that the issue most affected by the sudden influx of interest will be the proposal issue, not the wedding itself.