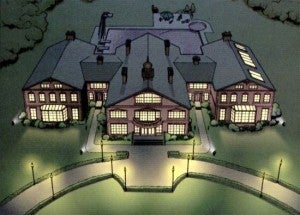 A popular trend on the Internet has been assigning real world value to fictional comic book characters and properties. We've already seen examples of such things as how much it would cost to be Batman or to be Iron Man. We've even gotten estimates of what the repair cost would be for all the destruction caused in The Avengers and the Man Of Steel.

Now, with The Wolverine set to hit theaters this weekend and X-Men: Days Of Future Past likely to be one of next summer's biggest blockbuster, it seems that it's the X-Men's turn in the imaginary valuations spotlight. The X-Men's X-Mansion is a pretty large place, and land in New York isn't exactly cheap. The real estate blog Movodo came up with a calculation to determine just exactly how expensive the X-Men mansion would be in the real world.

Movodo determined that the X-Mansion was 76,654 square feet and estimated the value per square feet at $759 which resulted in a total value of $58,180,386. While $58 million might sound like a lot of money, it's not even taken into consideration all the advanced technology in the X-Mansion. There's no telling what the price would escalate to in order to build the Danger Room.

Movodo even created an imaginary real estate listing for the X-Mansion.

X-Men's X-Mansion Valued At Over $58 Million