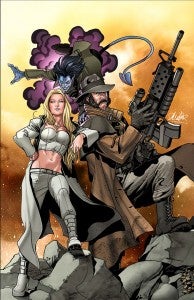 Marvel Comics has released a look at the cover of July's X-Treme X-Men #1, the new book that sees characters like Dazzler and Kid Nightcrawler tackling cosmic threats in an attempt to save the Marvel multiverse.

Larroca is best known as a superstar in the world of X-Men comics, but has also worked on high-profile Marvel titles like Iron Man. The creative team behind this book--Greg Pak and Larroca--was part of a big group of rumored creative changes that hit the Internet earlier this month, affecting the X-Men, Avengers and Fantastic Four comics at Marvel.

Check out the solicitation text from Marvel below. X-Treme X-Men #1 will go on sale July 25.

Marvel is proud to present your first look at superstar artist Salvador Larroca’s variant cover to X-Treme X-Men #1, an all-new ongoing series spinning directly out of the pages of Astonishing X-Men! Follow the team of Captain Howlett, Emmeline Frost, Kid Nightcrawler, and Dazzler as they embark on an epic journey saving the multiverse! But with one of the X-Men lost between dimensions and no guaranteed way home, will the adventure be over before it begins? New York Times Best Selling author Greg Pak and red-hot artist Stephen Segovia bring you the answers in X-Treme X-Men #1, coming to comic shops everywhere, the Marvel Comics app and the Marvel Digital Comics Shop this July.