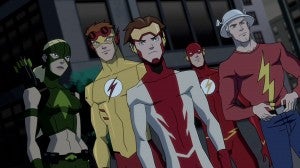 To the chagrin of the series' fans, both Young Justice and Green Lantern: The Animated Series will end this week, and Cartoon Network have provided a look inside their respective series finales.

While only Green Lantern--with an episode titled "Dark Matter"--has an actual trailer, there's a handful of preview images for Young Justice's "Endgame."

The official description of Young Justice: On the verge of finally ending the alien invasion, the team discovers the price of victory may be the entire planet Earth!

For Green Lantern's part: In the season finale episode, the Aya Monitor returns to the dawn of time to stop all emotion and all life from ever existing. Now, Hal must find a way to stop her – while Razer realizes the only way to save the universe may mean killing the woman he loves.

Check out the trailer below, and then preview images for both episodes below that.