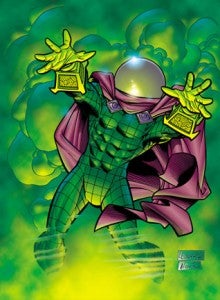 It's no secret that Halloween brings out a spark of creativity in just about everyone who participates, and there's no shortage of places to buy a costume or to cobble one together. We've also all oohed and aahed at someone's amazing costume at a comic book convention or show, admiring how much time went into making that giant, rubber suit, how they stitched together all that spandex or how much MONEY went into its creation. 'Tis the season however to look at some comic book characters that would be tricky to pull off/wear/execute during the yearly fest of all that is demonic, devilish and just plain fun, but man are they good ideas! All the more respect to those who have pulled off these costumes successfully. Send us pics if you have! Mysterio: One of Spider-Man's classic baddies from the Silver Age, this master of illusion sports an array of holographic tricks, slights of hand and other gizmos that make him a formidable foe on paper, but how would this costume translate to real life? Spending an evening dancing or trick-or-treating with what even Spider-Man refers to as a fishbowl on one's head would prove difficult, and you gotta have the body to rock a green grid pattern over spandex. Just sayin'! And let's not forget the food and drink factor! Degree of difficulty on this one is high, but on the upside, you could check everyone else out without worry!

Abe Sapien: While we've seen this one done before, but he's not an easy one to do! His counterpart, Hellboy, doesn't require quite the same amount of mask or makeup transformation that someone wanting to take on transforming themselves into this mermanesque would! Abe's a terrific character in the Hellboy universe, and those who take him on are in for lots of work! Capturing the opaque eyes and detail on the limbs and face is no small feat! Poor attempts at this costume could result in your being confused for the Creature From the Black Lagoon rather than a supernatural hero!

Clayface: While yes, you may say that no one would ever try to do this character, we're sure someone has tried, perhaps even successfully. But how? The bulk of the character, in both the comics and on the animated Batman series, is certainly a liability when, say, going to a party or hoping not to frighten the children. Sure, Clayface can make himself look like anyone else, but what's the point of that? The material used to create this hulking mass may not leave much room for error, lest you end up giving people the impression that you were going for the Fantastic Four's Thing and missed badly!

Beast: Talk about feeling blue! Imagine creating this X-Man's appearance and likeness! Simply dying a gorilla suit blue won't cut it, and depending on which incarnation of Beast's appearance you're trying to capture, you could have a really time-consuming costume on your hands! The glasses might be the easiest part of capturing this hirsute look! Authenticity is a key here, and the delicate balance between spirit gum and exposed skin will be something to negotiate. His Astonishing X-Men look may be the easiest of the group to go with, as at least half your body will be covered by a suit! Or you could always play it safe and go as he looked when X-Men first debuted in the 1960's, as a human!

Firestorm: While this one may not be tough in the actual construction of the costume, the nuts, bolts and details of the costumed hero with the power to manipulate matter and project powerful energy might be a bit tricky! The headgear for the Justice Leaguer, complete with flaming hair, has lots of potential avenues to completion, but which is best? Also, consider the comfort level for the red headpiece that covers everything but the wearer's face. Complete with the rocking shoulder pads, this costume has a high bar to clear!

Usagi Yojimbo: Finding a blue Japanese robe? Check. Samurai swords? Check. Developing a convincing rabbit costume to go under all of that? Hmmm... A popular character for years now, Stan Sakai's creation has a knack for sword swinging and adventure. Transforming one's self into this avenger is a worthy undertaking. The true authenticity of the outfit depends on the rabbit aspect however, which, honestly, anything less than that will result in your being regarded as simply a "ninja", "samurai", or some other misconception!

Purgatori: Certainly one of the more eye-catching comic book characters to ever grace the page, whether that be in her human or non-human form, Purgatori, in the same camp in some ways as Mysterio, is one that not just anyone can wear as a costume. The coverage of red paint aside, the giant wingspan sported by this vampire-goddess figure could certainly fill more than a few door frames. Wearing claws such as hers could also be a bit tricky, but hey, with a character like Purgatori, many would be willing to give the outfit a try, horns, nails, wings and all!!

Cyborg: Heavy metal indeed!! This Teen Titan has one of the most fitted yet most intricate costumes in the DC universe! As a result of a horrific incident, Cyborg was born when prosthetic, metal parts were added to his body. Creating a suit of metal covering over 80% of your body may be not the most difficult part of this costume, but the flexibility and mobility that Cyborg employs could be a bit tricky to replicate. Cyborg is a very cool character with a lot of weapons and skills, but a costume of him is a tall order, but we'd love to see one done well!

Madame Masque: Villain Whitney Frost's scarred visage led her to don her signature golden mask that covers her face. While she has been an off-and-on love interest for Iron Man Tony Stark for years, her attacks on the Avengers are noteworthy too, and while her costume is pretty easy to replicate, white over a black bodysuit with weapons, the mask could require a bit of work to keep the emotionless, robotic expression Frost exudes. Metal seems the only option, but how to fasten? How to secure? How heavy can it be? Lots of questions for this lady of espionage and evil!

Nightcrawler: Another problematic blue mutant! Nightcrawler, the teleporting X-Man, would be a fantastic costume, but consider the amount of makeup required to pull this off, along with attaching the tail! Nightcrawler's eyes would be a great detail to add to this particular outfit, but the boots and their detail are another story! How would one walk in shoes such as the ones required by Nightcrawler's unique footwear. Nightcrawler would be VERY cool, but not at the risk of permanently dying one's skin or tripping over themselves all night! Again, not saying that these particular costumes can never (or have never) happened, but they are certainly some of the trickier ones out there! These costumes fall into the category of those on the borderline between WOW and NOOOO! Are there others out there that you think should be on this list? Am I off? Let us know, and Happy Halloween!!!

Your Head in a Fishbowl: 10 Hard to do Comic Book Halloween Costumes