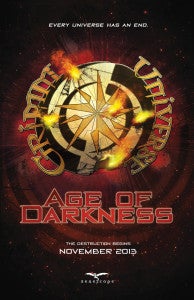 This weekend at New York Comic Con, Zenescope will officially announce details of a new event story titled Age of Darkness, which brings the Grimm Universe together for...

"Every universe has an end," though, is a bit of a giveaway that something major is going to get blown up here.

Zenescope's Grimm Fairy Tales Universe is built on four "realms" (Oz, Wonderland, Myst and Neverland), some of which are still fairly new to readers, with Earth acting as the nexus that connects them all.

So...what's getting destroyed here? The Four Realms? Earth? One realm? Will they be mashed together?

And of course, if they're mashed together, what keeps them from descending into a kind of Fables-style uber-mythology where the characters are all deeply involved with one another regardless of the era of their creation or nature of their original realm?

In Realm Knights and other books, we've seen that the government is actively after Highborns (their terminology for pure creatures of myth, fairy tales and the like) and Falsebloods (regular old humans who are descended from them). Would they do something that could destroy the world?

We'll take a look at the Zenescope November and December solicitations later on today; since the teaser poster says "The destruction begins November 2013," it's probably safe to guess that some of the framework for the Age of Darkness event, including perhaps some of the villains involved, have already been put out there in solicitation text that fans have seen but not necessarily connected yet.