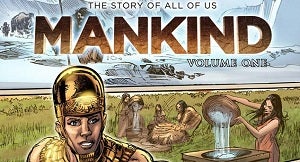 Zenescope Comics, best known for its gorgeous horror-twisted Grimm Fairy Tales, has become The History Channel's first ever partner in comics. "Mankind: the Story of All of Us," will be a History Channel television event, airing this November, promising to be very much of the same massive scope and quality of the Discovery events "Planet Earth" and "Life." Over twelve hours, they're going to attempt to cover the epic story of how after s few billion years and a couple of unlucky global extinction events, a very lucky species of ape managed to get up on two legs and take a walk around the world, changing life and the landscape on this planet wherever we went.

That's a whole lot of history, and for those of you shaking your heads and going, "Yeah, yeah: Ice Age, eatin' mammoths, then pyramids and Rome, William the Conqueror, Columbus sails the ocean blue--" no, there's so much more. Episodes will focus on surviving the Ice Age and spreading out across the globe, the advent of farming and cities, enormously successful cultures and empires in places like China and the Western hemisphere that had almost nothing to do with Egypt, Europe, or the Romans... Okay, fine: there's gonna be an episode on the Romans, but what did they ever do for us besides the roads, sanitation, wine and oh yeah, that pesky Latin alphabet I'm typing with right now, thanks to the Industrial Revolution, which will also get a whole lot of attention.

But the History Channel isn't just showing history, they're making comic history. For very first time, those Latin letters are going to be combined with pictures in a companion graphic novel, released by the good folks at Zenescope under their Silver Dragon line. The graphic novel, in two volumes, will also become available in early November and a whole lot of talent showed up to lend a hand. The books first three issues will include a stories by Marv Wolfman and Nathan Edmondson, and interior art from Dennis Calero and Giovanni Timpano. Bill Sienkiewicz did both some inking and some art, and on the outside they'll have at least one cover by Neal Adams coming down the line. The previews look gorgeous, and the text so far is both entertaining and -- Sweet Zombie Feynman! -- accurate and pretty well researched. Definitely looking forward to seeing the rest.