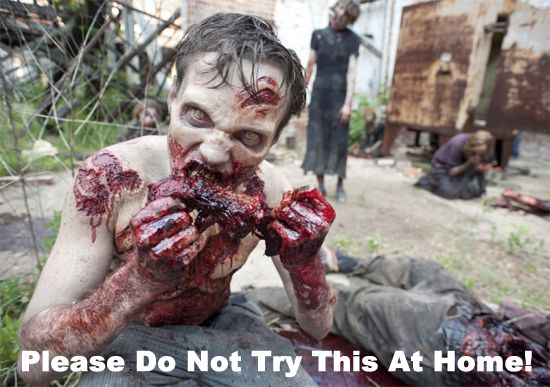 If a kid jumps off a roof with a towel around his neck, then Superman is to blame. If a teenager goes on a shooting spree at his high school, then violent video games are to blame. How long will it be before people start pointing their fingers at The Walking Dead over the recent acts of cannibalism that have been the focus of many recent news reports?

Now, don’t get us wrong, we don’t think The Walking Dead has anything to do with these unimaginable acts of violence. However, The Walking Dead is the number one show on cable television. Its popularity has brought zombies into the mainstream.

In fact, zombies are so popular now that the CDC thought putting out information about preparing for a zombie apocalypse would be an entertaining way to teach people about the importance of emergency preparedness in general. That was until things started happening that actually mimicked zombie attacks.

Now, the CDC has found it necessary to issue a statement re-assuring the public that there is no zombie apocalypse. According to the Huffington Post, agency spokesman David Daigle wrote the “CDC does not know of a virus or condition that would reanimate the dead (or one that would present zombie-like symptoms).”

The only thing stranger than the CDC using zombies to teach about emergency preparedness is the CDC having to issue a statement to re-assure the public that zombies are not real. We’re thinking it’s only a matter of time before AMC’s popular Walking Dead show starts to get the blame. What outraged group will be the first to declare that it’s all these zombie TV shows and movies that are encouraging people to eat other people?

Perhaps, AMC will even be forced to add a disclaimer to the upcoming season three of The Walking Dead. We can see it now: “The events in this program are fictional and performed by actors and professional stuntmen. Please do not attempt any of the flesh-eating acts portrayed in this program at home.”

Zombie Apocalypse: Will The Walking Dead Be Blamed?