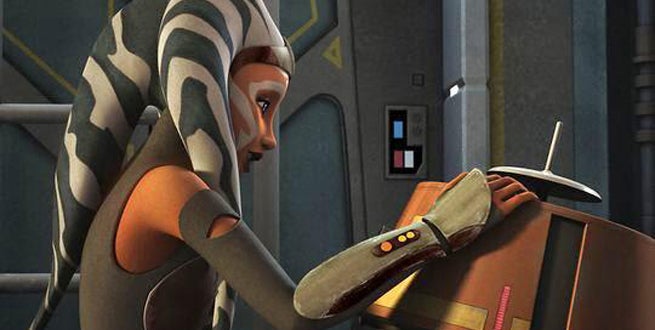 How 'bout that season finale, huh? By now, if you're a die-hard Star Wars fan like me, you've probably watched the Star Wars Rebels season 1 finale at least 3 times. If you haven't yet, well, obviously, spoiler alert! And get watching, I bet you'll love it!

Now that the first season is over, of course there will be more viewings of the product as a whole to see what we might have missed, but instead of looking back, we like looking forward. The nature of animation means season two is already well underway, as evidenced by the picture of Sarah Michelle Gellar in the recording booth that was tweeted out to announce her joining the cast (and her husband, Freddie Prinze, Jr. who plays Kanan). Still, if Lucasfilm is reading, here are some things we'd like to see in season 2 of the DisneyXD animated series.

With Ahsoka Tano revealed as Fulcrum, the Rebel coordinator, there were about a million possibilities opened up instantly (more on this later, in fact). While there are many interactions we want to see, certainly near the top of that list is Ahsoka working with Kanan and Ezra to hone their Jedi skills.

Let's think about it: Ahsoka was a lightsaber natural, wielding her dual sabers with skill as a padawan. She was trained right up to the point where she would've taken the trials to become a full Jedi Knight, before leaving the order. And she's had fifteen more years since to get even better. If Kanan and Ezra are going to really succeed and help the Rebel Alliance grow, they need to improve, and fast, especially with a certain right-hand-man of the Emperor apparently coming at them directly, now.

While we love the core cast (and more on that in a moment), we have to remember: by the time the original Star Wars (Episode IV: A New Hope) begins, the Rebel Alliance is well up and running. They're big enough that the Empire is actively looking for a full-size military force, and they have the resources to mount an attack on something as significant as the Death Star.

So, in other words, it ain't just two Jedi, a Mandalorian, a Twi'lek, and a Lasat.

Now that we've heard the words "Rebel Cells," we need to start getting an idea of scope. We don't need that full-fledged Alliance yet – there are four or so years to build that up – but we need to know that it's expanding, and that it's big enough that maybe some people hear whispers of Jedi but don't believe it, or some just don't know there are any Jedi at all. After all, Obi-Wan and Luke still need to be a major surprise to the grand majority.

The Empire Gets Some Victories

The Empire Strikes Back is largely regarded as the best film in the series, and the movie is all about Imperial might. As Kevin Smith so expertly said in the script for Clerks, it's "a series of down notes." Han is captured, Luke loses a hand, the Rebel base is attacked; it's clear that the Empire is a force to be reckoned with. And this all came after a great loss.

With a force-wielding Imperial agent dead, a Star Destroyer demolished, and Grand Moff Tarkin personally insulted in the process, it's time once again for us to see the Empire strike back. It's alluded to with Darth Vader being called in at the tail end of the Season 1 finale, and now it's time to see it happen. The Empire has to be strong, it has to be scary, and that means it has to win sometimes. That may mean bad things for some of our favorite Rebels, but it will make the story more believable, stronger, and fit into the larger saga much better.

Okay, this may seem like it contradicts the entry two spots above, but it really doesn't. While you can have rotating supporting cast come in and out of the series, or do big shows of force to demonstrate the size and scope of the galaxy, this show works so well because ultimately it's about five people and one droid. I love Ahsoka (more in a moment #brokenrecord), and I want to see more of her, no question. But I have fallen in love with Hera, Kanan, Sabine, Ezra, Zeb, and Chopper, and I want this to remain their story at its core. Keep treating this series like an extension of the Original Trilogy, with a main cast that has the rest of the galaxy rotating around it, and it will keep the story the best it can be.

I mean, come on, people. With Ahsoka alive, well, a leader, still wielding two lightsabers, double the age and life of training and surviving… we have to see her face down her old master, right?

The emotional apex of Ahsoka's story would see her fighting against Darth Vader, the former Anakin Skywalker, and somehow, some way, having her realize just who he is. It has now been established in canon that Vader remembers his life as Anakin well (see: Star Wars and Darth Vader by Marvel Comics), so even if she doesn't know that Anakin turned against and slaughtered the Jedi, becoming Darth Vader in the process, he will most certainly recognize her.

If Ahsoka does realize who he is (or heck, if he outright tells her – you know, Vader is known to spill the beans, and it's a common Sith tactic to attack psychologically along with physically), she'll have an all new emotional journey to go on. The question will have to hit her: "what if I had stayed? Could I have prevented this? All of this?"

Now, this fight isn't likely to end well for Ahsoka, and I know and realize that. After all, Vader is in episodes 4-6, and Ms. Tano is not. But we could see something really special here, too – a spark of hope from Vader, a thought that not all is lost; we could see the beginning of what is paid off in Return of the Jedi's closing moments.

And putting all that aside: we'd get a bad-ass force-filled lightsaber battle between a betrayed padawan and her now-Sith master. I mean, come on, people.

Those are just a few of our ideas for Season 2 of Star Wars Rebels. Tell us what you'd like to see in the comments!