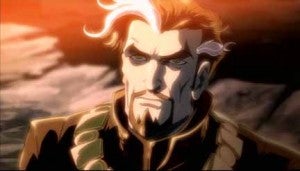 While the studio have promised announcements soon regarding the post-Avengers plans for Marvel characters on film, so far only Captain America and Iron Man sequels appear to be moving forward seriously. New ground isn't being broken and even long-stalled projects like Ant-Man have not yet been forced by the studio to poop or get off the pot. But things seem to be in motion, as the rumor mill is starting to churn things out. Yesterday, in the middle of the long, quiet weekend of hardly any news that accompanies more or less any holiday, Comic Book Movie began reporting that Avengers and Elektra writer Zak Penn had begun working on a Doctor Strange movie for Marvel. It was a plausible enough rumor, given that any number of people at Marvel have expressed interest in the character as a property for film in the past and that Penn had told a fan on Twitter that he might be working on "something strange" later this year after being asked whether he might tackle superheroes again soon. The rumor was quickly discredited--again by Penn on his Twitter account--and while Doctor Strange may still be in development at Marvel, as of now fans have no new information on which to base that assumption after all. This morning, though, Bleeding Cool is running with a story sourced from a couple of blog posts at Blue Sky Disney, suggesting that Winnie The Pooh director Don Hall might be working on an animated feature based on a Marvel property at Disney. The wording of the posts is vague and there's every possibility it will come to nothing, but certainly Marvel has been hinted at, and the involvement of Hall seems to suggest a theatrical feature. The Winnie the Pooh film was well-reviewed and seems to have been considered a reasonable success in spite of not making back its production budget in theaters, so it's hard to imagine its director taking a step back to work in the direct-to-video or video-on-demand market again, particularly as the story implies that it might be a lesser Marvel property he'd be working with. Pooh is better known and presumably better money than many of those. The idea of a Marvel animated feature is one that's very appealing, one assumes, to many people at Disney. Making those characters all-ages accessible and making a film that has huge potential upside while limiting the production budget to less than $100 million is potentially a great opportunity for the studio to make use of some of Marvel's less well-known intellectual property that's less likely to make $500 million at the box office. In the past, Marvel have produced direct-to-video feature films for characters like The Fantastic Four, Iron Man and--yes--Doctor Strange.

After Avengers: The Marvel Movie Rumor Mill Heats Up