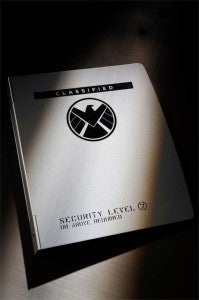 The globe-trotting shoot for the first season of Marvel's Agents of S.H.I.E.L.D. made its way to Stockholm this weekend, bringing an army of men in suits, wearing red masks and with briefcases handcuffed to their wrists. What's that about? It seems very reminiscent of the climactic scene of The Thomas Crown Affair, actually, in which an art thief recruits a team of extras to dress like the man in the painting The Son of Man by Rene Magritte and gather in a museum, helping to obscure his escape after a heist. Nobody knows for sure, according to the reporter for MovieZine who was on site to snap photos, but they report that several scenes were shot with actress Pascale Armand chasing them. Armand, a star in the theatre world more than the screen, has appeared in Kinsey and on a pair of Law & Order episodes, as well as providing the voice of Angela Allan in Grand Theft Auto: Liberty City Stories and Grand Theft Auto IV. More recently, she appeared in The Convert, a 2012 religious satire by Danai Gurira of The Walking Dead fame. According to MovieZone, the mystery of the briefcases will be introduced, but not solved, when the series debuts, and the scenes set in the Swedish capital will be seen in the series's fourth episode. This isn't the first international location for Agents of S.H.I.E.L.D., which appears to be filming on location as its characters navigate the globe. While this might seem counterintuitive for a show set in the New York-centric Marvel Universe, it's equally sensible for a show that's reportedly going to tie into Thor: The Dark World (which takes place partially in London) and Captain America: The Winter Soldier, a spy thriller that will take place all over the world.