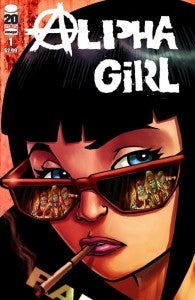 There's no denying that zombies are hot, thanks in large part to the success of The Walking Dead TV show on AMC. Now, the comic book company that started The Walking Dead has announced a new zombie-focused miniseries. Image Comics will be releasing a man-eating zombie women miniseries called Alpha Girl starting in February 2012. The Alpha Girl miniseries is written by co-creators Jeff Roenning and Jean-Paul Bonjour with art by Robert Love. In an unusual twist the comic book is set in 1984. Image Comics describes the scene as, "Reaganomics are in full swing, Herbie Hancock ruled the first MTV Music Video Awards, movie-goers met The Ghostbusters and The Terminator, Indira Ghandi was assassinated, B.A. Baracus pitied fools, and a third rate cosmetics company single-handedly destroyed civilization. Is Judith, a 17-year-old chain smoking delinquent humanity's last hope?" "When I got hooked on comics in 1980 I quickly found that the best titles were relegated to the 25 cent box. Creepy, Tales From The Crypt, and Ghostly Tales were my favorites, but they never went far enough," said Jeff Roenning. "Alpha Girl has been a chance to not only quench my blood lust, but to do it with a kick ass heroine." "As a child of the 1980's, it has been a blast drawing a comic that takes place during my formative years," said Robert Love. "The Adidas track suits, big hair, and the '80's rock 'n' roll and hip hop - I'm definitely having fun!" "I cut class my sophomore year of high school to go hang out, smoke cigarettes, and check out girls. I ended up watching a movie called Evil Dead 2. When I saw that flick I had found my calling in life," said Jean-Paul Bonjour. "When Roenning approached me with the concept of a cosmetic company turning all women into man-eaters, with a kick ass protagonist like Judith, I was all in. If you're like me and a fan of the zombie horror genre when the lead character has a flash of attitude, you are in for a hell of a ride." The first issue of Alpha Girl is scheduled to arrive in comic book stores and on digital platforms on February 1, 2012. However, there will also be a sneak peek of Alpha Girl #1 in the back pages of Hack/Slash #11, which will be available on December 28, 2011.