It's been an eventful few days since the last episode of The Walking Dead aired on AMC. While fans are looking forward to seeing Carl face off against zombies this week in "Judge, Jury, Executioner," a handful of little teases at what's to come have managed to sneak through the cracks. With only three episodes remaining this season, every little bit is important so it's worth taking a look... Please note that in case the "What's coming up?" in the headline wasn't clear enough, there will be minor spoilers in this article. If you want to go into the last three episodes of the season without specific expectations, turn back now or be warned that there be SPOILERS AHOY. 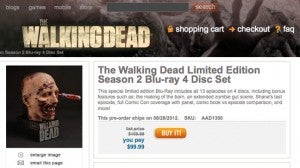 As reported on Thursday by The Hollywood Reporter, an entry appeared briefly on the AMC Store offering a special edition Blu-Ray of The Walking Dead's second season (in a very cool-looking box that my wife would never let me have in the house). In the description of the item, shown at right because it's since been removed from the AMC site, one of the special features is said to be examining "Shane's last episode." The actor is in negotiations for another show, and the character dies pretty early in the comics, so many fans have been expecting it, but so far the television version of Shane has been an engaging character who's essential to the overall narrative. Given the direction Shane has been heading so far this year, it's not surprising that his last episode would appear in season 2, but there has been some speculation that Shane might simply leave the group, which would give Bernthal (who is very popular with the fans) an opportunity to return at a later time. Giving his character an official last episode seems to shoot that theory in the leg and leave it for the walkers. ...Too soon?... Character deaths are something that Norman Reedus, who plays Daryl Dixon, teased when he talked to Huffpost TV earlier this week as well. "The next three episodes, it's all fireworks ... from here on out, it's just all bloodshed and massacres and it's nuts," said the actor in a video interview. He seemingly confirmed, though, that along with losing some old characters and gaining some new, his own character won't be one of the ones exiting. "I sort of know where we're headed in Season 3, and it's going to be amazing. It's going to blow people away," he told the site. 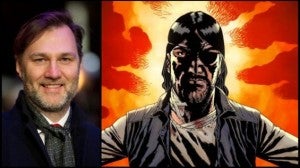 Most notable, though, is that he confirms in that conversation that Michonne will arrive in time to square off with The Governor in season three. Whether she'll be one of the new characters appearing at the end of this season or someone showing up next year along with David Morrisey's Governor is unclear. Morrisey himself, meanwhile, is getting glowing reviews from all involved. Reedus told HuffPost TV that the incoming Governor is "an awesome actor," which may be something he was able to glean from test footage that's apparently already been shot. Robert Kirkman, an executive producer, writer, and the co-creator of the comics the show is based on, seems to hint to the existence of such footage in a new interview with The Hollywood Reporter (that's where we borrowed the graphic at left) where he sings Morrisey's praises. "Having seen his screen tests and all of the acting that he's done, I know what's coming and what we're doing with The Governor and David Morrissey is going to knock it out of the park," he said. The next episode of The Walking Dead airs tomorrow at 10 p.m. on AMC. [phpbay keywords="walking dead" num="8" siteid="1" sortorder="EndTimeSoonest" templatename="columns" columns="4"]