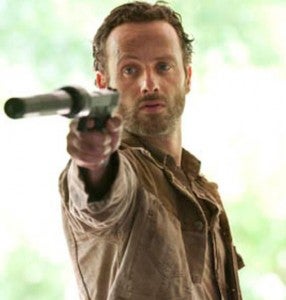 Last night, Walking Dead fans were treated to what many are describing as the best episode ever of The Walking Dead. In fact, we at Comicbook.com think that after the "Killer Within" episode the series deserves to not only be nominated for but to win an Emmy for Outstanding Drama Series. However, Outstanding Drama Series is not the only Emmy Award that The Walking Dead deserves. While the entire Walking Dead cast performed at the top of their game in the "Killer Within" episode, there was one performance that was truly exceptional. Andrew Lincoln deserves to be nominated and win an Emmy for Outstanding Lead Actor In A Drama Series. Lincoln has always done a great job as series lead Rick Grimes, but he took it to a whole new level in "Killer Within." The Walking Dead is a TV series that gets about as far away from reality as you could imagine a TV series being. Yet, Lincoln's performance as Rick Grimes makes viewers forget that everything going on around him could never happen in the real world. Lincoln's performance is so powerful that it actually makes The Walking Dead seem real. Spoiler warning if you for some reason have still not watched the episode, but there are two parts where Lincoln's exceptional acting skills are really showcased. When Oscar points a gun at Rick, the look on Rick's face is entirely of a man who really believes this might be the end.  But even more powerful is when Rick realizes his wife Lori is dead and his son Carl had to be part of it, Rick's complete collapse into a sobbing huddle is haunting. It's not an easy task for an actor to show a character breaking down in sorrow and agony, but Andrew Lincoln does it in a way where you really feel for Rick. While Lori Grimes is a character that many Walking Dead fans have loved to hate because of her affair with Shane, Rick's expression of sorrow is so powerful and overwhelming, many viewers probably couldn't help but feel bad that she's gone.