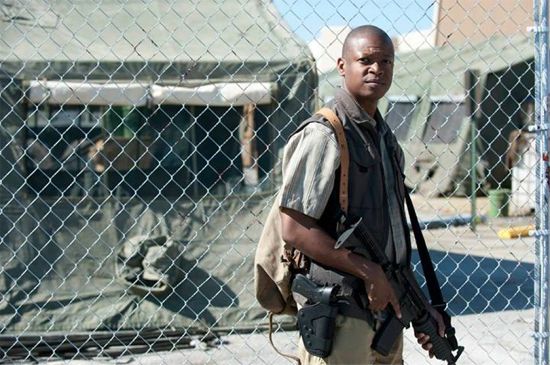 Bob Stookey was a pretty minor character in the comic book source material behind AMC's ratings smash The Walking Dead. And yet, he's front and center in the series premiere last weekend and it seems, from the account give by the actor of his audition process, that the character is going to play a not-insignificant role in the season ahead. So...why? What's so special about Bob Stookey? We've got a few ideas. 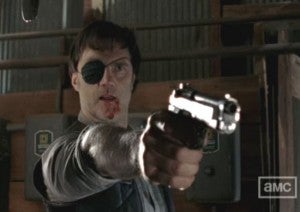 Will he save The Governor? In the comics, Bob's experience as a combat medic gave him the necessary skill to save the life of The Governor, who had been carved up and left for dead after being on the losing end of a fight with Michonne. Nobody thought he could be saved--and they were particularly unsure that Bob the drunk could do it--but he saved the town's leader, who then proceeded to get himself a tank and make a last stand on the prison. It was brutal, bloody and not at all like the somewhat disappointing conflict between Woodbury and the prisoners at the end of Season Three. And there are those who believe we still might see some version of that story play out, considering that The Governor, Martinez and Shupert are still out there and, as far as we can tell, can't be found. What if, when he finally turns up, he's in need of help and Bob, always eager to prove his worth to the group, decides to save this poor, injured man and bring him home? That, or some variation thereon, doesn't seem too out of the realm of possibility...especially since saving The Governor is pretty much the key thing that Bob ever accomplished in the comics. 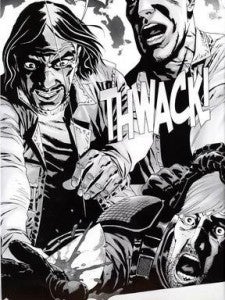 Rick's hand On the other side of that is Rick's hand. In the comics, of course, Rick lost it during a conflict with The Governor, just before Michonne made a mess of ol' one-eyed Phil. Robert Kirkman has suggested in the past that he regrets removing Rick's hand and probably won't do it in the TV series, but if he does...well, having a triage medic onsite couldn't hurt anything, that's for sure. Alcoholism In the comics, Bob's alcoholism was one of his defining traits; the other Woodbury residents were concerned about it, and since he was a character who didn't get a lot of page time, I remember that conversation defining him to the reader. Since we saw a bit of a tease of that aspect of his personality in the season premiere, don't be surprised if it comes back later. Reinforcing the ongoing motif of disease (next week's episode is called "Infected," and will deal with the fallout from Patrick's death from whatever it was that made him sick this week...plus, you know, the zombie thing), alcoholism could be used as a powerful symbolic storytelling device. On a more face-value level, it's got practical storytelling applications in that it gives the characters (or at least Bob's character) another obstacle to overcome. As we saw this week, he doesn't even have to be drunk for his alcoholism to be a problem in the world of The Walking Dead, where a moment's hesitation could cost someone their life. And if he were drunk, you have an entirely different batch of stories to tell. And let's not overlook the fact that, in the past, The Governor has always had a cache of good liquor around. Even if he didn't come from Woodbury, there's always the chance that Bob and The Governor have crossed paths before and he doesn't see Philip as the monster everyone else does. 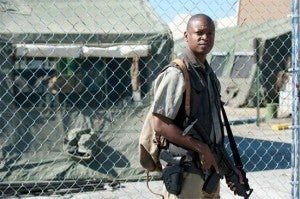 The token vet When Aaron Sorkin's TV show-about-a-TV show Studio 60 on the Sunset Strip was teetering on the brink of cancellation, one of the characters cynically joked with his pregnant girlfriend that a pregnancy in trouble storyline was like ratings catnip, especially among young, female viewers. You know what does that for military families and red state audiences? Members of the military. Adding a guy whose hook is that he's a combat medic allows you to attract the attention of an audience who can relate to his experiences and put themselves more easily in his shoes (and if you think that kind of thing isn't a concern, remember that The Walking Dead gets a signal boost from gun-rights groups). Being a combat medic also means that people who can't relate to those experiences or are opposed to war can get behind him, too, in a way they couldn't if he were an Army Ranger sniper or something.