Before you punch your ticket to Baltimore, Maryland for this weekend's Baltimore Comic-Con, be sure to stock up on plenty of reading material for your plane, train or automobile travel! You certainly won't lack for pages and pages of action this week, and DC kicks things off with an explosion of Bat-titles! Kicking this off is the first issue of new limited series Batman: Unseen, which promises us a new supervillain to add to Batman's formidable rogues' gallery. Batman Annual #27 and Batman and Robin #5 also drop into stores this Wednesday, and fans should look for a new printing of the landmark graphic novel Batman: The Killing Joke, the book that redefined former Batgirl Barbara Gordon's role in the DCU. Doom Patrol #3 returns with a "sort-of new member", along with James Robinson's Justice League: Cry for Justice #4, which continues to examine the role of true justice while also being true to the virtues of heroism. Starro the Conqueror returns once again in the pages of R.E.B.E.L.S. Annual, which will deal with the origin of the real Starro! As we're told one character's origin, we see the finale for another set of heroes when Strange Adventures wraps up with part eight of eight comes out this week! Be sure to pick up the conclusion to this Jim Starlin penned series! 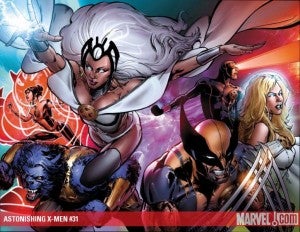 Marvel brings us the return of Astonishing X-Men with issue thirty-one, with Abigail Brand, director of S.W.O.R.D., bringing a crisis to the doorstep of our favorite mutants. It's also a big return this week for Criminal, with the publication of Criminal: The Sinners #1. The new Sorcerer Supreme makes his official, solo debut this week with Doctor Voodoo: Avenger of the Supernatural #1 hitting stands. How will this newest wielder of powerful, mystic forces fare in his solo adventures? Find out!! We're taking another trip back in time this week, as Marvel returns to the past with Spider-Man 1602 #1. And while we're winding the clock back this week, let's all check out X-Babies #1, who will make a trip to Mojoworld in their first adventure here! Nick Fury moves back into Norman Osborn's radar this week, with the release of Dark Reign: The List-Secret Warriors #1!

Dark Horse works to sate our Buffy appetite this week with the release of Buffy the Vampire Slayer #29. Will Buffy and the Scoobies live to fight another day in their Tibetan refuge? Find out here! A couple of fantastic fours also come our way from Dark Horse this week, as issue four of both Star Wars: Invasion and Witchfinder: In the Service of Angels arrive in stores. Image Comics has just the books for you, in time for Halloween no less, when Haunt #1, by writer Robert Kirkman, debuts! A murder is afoot in this book, and a ghostly companion will help Daniel, the protagonist, solve the case! In other paranormal comic book news, the one-shot I Sell the Dead delivers a forty-eight page story of grave robbing and haunting from the past!

Boom! Studios continues to crank out the rebirth of the classic Disney characters for a new era, this week with the release of Walt Disney Comics and Stories #699, an epic tale that combines many of the biggest stars of Disney all in one book! Kill Audio #1, described by Boom Editor-in-Chief Mark Waid as "disturbing, and I mean that as a compliment!", debuts, focusing on a character, Kill Audio, a troll who lives in a land of artistic and musical consumption as a controlled substance. Should make for a limitless new series! Dynamite Entertainment brings an eclectic mix of books this week, with Sherlock Homes #5, The Boys #35 and The Good, the Bad, and the Ugly #4 all making their way into stores this week! IDW Publishing brings an interesting cover for Angel #26 this week, as a new story line, "boys and their toys", kicks off with this issue! Get busy! There's reading to be done so you can be ready for the panels, mega-guests, and much more at this weekend's Baltimore Comic-Con. If you see us there, say hello! We'd love to meet our readers face to face!!

My Hero Academia Cosplay Sets Its Sights on Lady Nagant