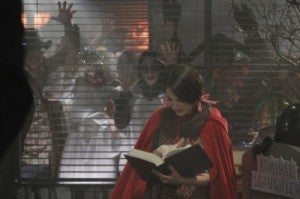 Despite a furious Twitter campaign by The Walking Dead executive producer Glen Mazzara and the show's fans, AMC's zombie hit The Walking Dead narrowly lost out the title of the season's best show to NBC's cult favorite Community. "I just voted 700 times," Mazzara tweeted just after midnight E.S.T., conceding defeat. "What a waste of our time. Oh well, Walking Dead fans, we gave it a good try. Maybe next year." Last year, when the fan votes were cast and the award presented, it was Community that came in runner-up to a show that it was clobbering in the ratings--Chuck, also from NBC, which ended this year (and which appears to have given its Subway sponsorship deal to Community as a lovely parting gift). This year, it steamrolled its way through network-mates 30 Rock and Parks and Recreation before clobbering Fox's The New Girl and ABC's Modern Family. The Walking Dead, meanwhile, rampged through the CW's The Vampire Diaries, followed by Fox's Fringe, AMC's Breaking Bad and FX's Sons of Anarchy before Troy finally turned down the thermostat and stopped the plague. While Community faced off against ratings juggernauts and usually won big, bolstered by the support of a strong cult fan base, The Walking Dead squared off against a series of cult-favorite shows and often found itself lucky just to survive the encounters. That was the model for the final round, where Community won just 51% to The Walking Dead's 49%. The voting on Hulu's Best in Show competition is hardly scientific (as suggested by Mazzara's tweet above). Fans of the shows were both seen on Twitter in the final hours of voting coaching others that you could vote over and over by refreshing your browser, and there was some incentive to do so. Just before 10 p.m., actress Laurie Holden--who plays Andrea on The Walking Dead--tweeted an offer of autographed photos to the first hundred fans who reached out to her, should The Walking Dead win. Even so, one has to hand it to Community's fanbase; they know how to mobilize. Earlier this week, TV Guide's fan-voted awards named the show as favorite comedy, as well as favorite ensemble cast. Maybe with a little elbow grease, they really will get six seasons and a movie.