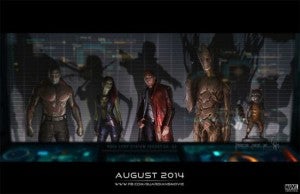 We've got boots on the ground at D23, so we ought to have some fun photos and quotes for you later on today--but for now, here's a quick summary of what Disney and Marvel Studios brought to the table, with more specifics to come later when D.J. Kirkbride reports from the floor. "You know exactly who they are," teased Disney's Alan Horn as he introduced the Marvel Studios portion of the convention's live-action panel. Kevin Feige, the President of Marvel Studios, joined them first, noting that the studio had debuted the very first clip from Marvel's The Avengers, the first Marvel Studios film to be produced after Disney bought the company, at D23 two years ago. That film was the final installment of the first "phase" of the Marvel Cinematic Universe, and today's presentation covers the second phase, including Thor: The Dark World, Captain America: The Winter Soldier, Guardians of the Galaxy and Avengers: Age of Ultron. Phase Two kicked off earlier this year with Iron Man 3, the highest-grossing installment of the Robert Downey, Jr.-led franchise, and next up to bat will be Thor: The Dark World, hitting theaters on November 8. Zachary Levi, Tom Hiddleston and the film's director Alan Taylor joined Feige on stage to talk about Thor: The Dark World, giving a couple of sneak peeks at footage from the film. "I should apologize for not turning up in costume. I'm not going to get this crowd to kneel. This is Disneyland. But I did bring some friends of mine," Hiddleston said, introducing Natalie Portman and Anthony Hopkins from backstage. This time around, Portman admits, Jane is the one who is the fish out of water on Asgard, whereas last time around it was Thor adjusting to Earth. Fans at the show got to see a bit of that with a clip of her arrival on Asgard. Joe and Anthony Russo, the directors of Captain America: The Winter Soldier, were on hand to present the film, along with stars Sebastian Stan (Bucky/Winter Soldier), Anthony Mackie (Falcon) and Chris Evans. Revealing that the film has completed principal photography, Feige shared a couple of clips--one of which was the clip from San Diego Comic Con International and one of which showed Cap's team engaging in some espionage and combat while piloting a flying S.H.I.E.L.D. vehicle. As they did at Comic Con, Stan and Mackie joked with the audience at D23 while Evans talked about the difficulties Cap has adjusting to the modern age, while stressing that he's making progress and it won't be more fish-out-of-water comedy. The last part of the presentation was for Guardians of the Galaxy, James Gunn's superhero space opera. "We have the same feeling we did in 2006 and 2007 when we were making a movie called Iron Man," Feige told the audience. In this case, the cast couldn't be on-hand since they're in London, where they've been shooting since just before San Diego Comic Con International last month. That time around, they pulled the Guardians cast from their set for a visit to Comic Con, but let most of the Thor: The Dark World cast stay home, so apparently turnabout is fair play for D23. As with most of the footage shown, what the crowd at D23 got to see today was the same footage recycled from Comic Con for Guardians of the Galaxy. Expect to see more at later big conventions, as it's been hinted that the film will only be shooting for another couple of months, so perhaps even by New York Comic Con they'll have some material to bring around to shows if they're so inclined. That's a wrap on Marvel today; we'll keep you posted with more updates of interest!