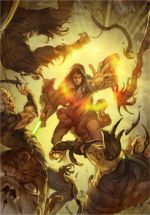 Marvel and DC won't be the only comic book publishers cranking out exciting, page-turning adventures this summer. Dark Horse and Image both have plenty of stories lined up for this summer, with some already highly anticipated storylines in the works!

Jedi Invasion - Dropping into stores on July 1st, Dark Horse releases the next installment of its successful line of Star Wars titles with Star Wars: Invasion. This five-issue series has the Jedi forces staring down a bold new threat, potentially even more deadly than the Sith! How will Luke Skywalker and his allies triumph? Also look for new storylines to begin in other Dark Horse titles such as Star Wars: Knights of the Old Republic and Star Wars: Legacy.

Two exciting miniseries land this summer, with B.P.R.D 1947 having our group follow up their adventures in B.P.R.D 1946, this time with a threat older and possibly more deadly than the one they just faced from the Nazis! Also from the pages of Hellboy and Abe Sapien comes the miniseries Witchfinder: In the Service of Angels, which will focus on nineteenth-century detective Edward Grey! Plenty of supernatural suspense will be on the way from Dark Horse this summer!

Back From the Dead

- Like others who have "died" in the comic book industry before, the 1960's era magazine Creepy finds itself alive and well. After negotiations and several legal obstacles, Dark Horse announced the relaunch of this beloved black and white horror series, and promises modern twists and plot lines coupled with the classic horror and ghoulishness of the original.

- Fan favorite series Mice Templar returns this summer with Mice Templar: Destiny #1 hitting shelves in late July. The Image Comics favorite has earned a strong following, this time focusing on the adventures of the knight Karic as he faces a hostile world on the brink of going totally out of control. Word of mouth and the interest of new fans should make this one of Image's most popular books of the summer!

Not so Limited Wonder 0comments

- The hot summer months will also see Image Comics release several exciting trade paperbacks. Expect volume ten of The Walking Dead, entitled What We Become to be a big seller when it arrives in early August. Coming before that though in July is the eagerly awaited hard cover collection containing volume one of Frank Cho's Liberty Meadows Sunday Strips. One of Image Comics' most well-known characters, Spawn, also will be seen in a collection this summer, as Spawn Origins volume two is released.