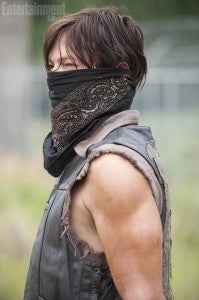 What is in store for Norman Reedus' character Daryl Dixon during Season 4 of The Walking Dead? Well, the rumor we heard is that they kill him off in the first episode. No, we jest, there's no way Daryl's going to die. But it does look like he might be going outlaw. In a new image released by EW, Daryl Dixon is shown sporting a bandana to cover the lower half of his face. During The Walking Dead Season 4 preview weekend, Norman Reedus indicated to Kevin Smith that Daryl might be tiring of his crossbow. Norman Reedus said, "The problem with the crossbow is that if there is a bunch of things to kill in front of me, you know, it's boom, boom, load it in camera, then you've got to drop it out, throw the arrow on the ground, pick it back up, then it's a digital arrow. But to do all that real quick is real taxing." Also, a recent You Tube video showed Daryl Dixon doing target practice with a M-16 machine gun. Could Daryl be planning to rob a bank (or a stagecoach)? During a zombie apocalypse, there probably wouldn't be much point in robbing a bank. Our guess is that maybe the stench of rotting flesh is starting to take it's toll, and all the Walking Dead survivors might start sporting masks. Either that or the lower half of Daryl Dixon's face is horribly scarred in the premiere episode, and he'll be wearing a mask to cover it up for the rest of the season. We jest again. We're sure that Walking Dead producers would never allow Daryl's face to be scarred. Or would they? The Walking Dead Season 4 is set to premiere on AMC in October 2013.