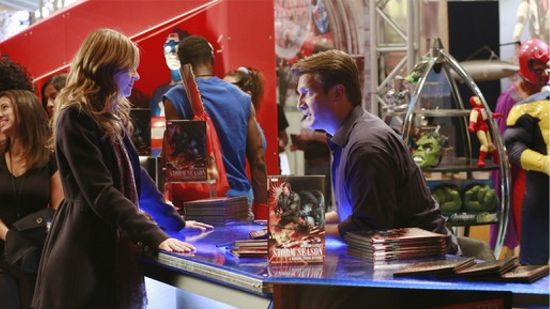 Everybody has been wondering what crossovers we might see with Disney buying Lucasfilm. It looks like the first Disney crossover might actually take place as early as Monday night on Disney-owned ABC. On the next episode of ABC's Castle, Richard Castle and Kate Beckett will be investigating a murder at a sci-fi convention. The episode is called "The Final Frontier." According to the ABC description, "When a body is found at a sci-fi convention, Castle and Beckett are warped into the heart of fandom -- a world of egotistic celebrities, diehard costumed fans and enough drama for two galaxies." In one scene featured below, Castle and Beckett talk to a man claiming to have a double-bladed light saber and wearing a "Han Shot First" t-shirt.  Of course , Star Wars fans knows this phrase refers to a controversial scene change made in Star Wars Episode IV: A New Hope. Star Wars isn't the only Disney property featured in the episode. A sneak peek photo from the episode shows Richard Castle signing copies of Castle: Richard Castle's Storm Season graphic novel from Marvel Comics. There are also several Marvel Comics characters on display in the background. There appears to be a Captain America statue, a Hulk mask, an Iron Man plush doll, and Hulk hands. There are also two cosplayers dressed as Magneto and one of the X-Men. The episode features a number of sci-fi related guest stars including Armin Shimerman of Star Trek: Deep Space Nine, Ed Quinn of Eureka, Christina Moore of True Blood, and Erin Way of Alphas.  "The Final Frontier" episode of Castle airs on Monday, November 5  from 10:01 PM to 11:00 PM ET on ABC. The episode is directed by Jonathan Frakes of Star Trek: The Next Generation.