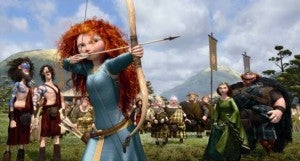 Walt Disney Studios revealed today in a press release that the forthcoming Disney-Pixar animated feature Brave will be screened Sunday, nearly a week before its official theatrical release, in a special showing intended for members of the United States' Olympic Team for Archery. The screening, which is to be attended by Brady Ellison, Miranda Leek, Jake Kaminski, Khatuna Lorig, Jacob Wukie and Jennifer Nichols, as well as Olympic Team alternates Heather Koehl and Joe Fanchin, will take place Sunday at 7:30p.m. in Ogden, Utah, prior to the third stage of the Archery World Cup, which begins June 18. The film, which revolves around the adventures of a headstrong, young princess named Merida who is desperate to avoid the life her parents have planned out for her, will hit theaters across the country on June 22. Says Disney:

OGDEN, Utah (June 14, 2012) — Disney•Pixar's "Brave" targets archers this week with a special screening of the epic action adventure on Sunday, June 17, 2012, at 7:30 p.m. by the athletes of Team USA, including the archers nominated to the U.S. Olympic Team for Archery. The elite athletes, who will be in Ogden for the third stage of the Archery World Cup (which begins June 18), will attend the special screening to celebrate the film's protagonist Merida, whose expert archery skills play a pivotal role in her attempts to change her fate in "Brave." The screening takes place five days before "Brave" hits theaters on June 22. Expected to attend are Brady Ellison, Miranda Leek, Jake Kaminski, Khatuna Lorig, Jacob Wukie and Jennifer Nichols, as well as Olympic Team alternates Heather Koehl and Joe Fanchin. Many of the U.S.' number one world ranked compound teams are also expected to attend, including athletes Erika Anschutz, Jamie Van Natta, Christie Colin, Diane Watson, Reo Wilde, Dave Cousins, Braden Gellenthien and Rodger Willett Jr. The United States currently holds number one world rankings in seven out of 10 world ranking categories, and the U.S. men's recurve team, along with Ellison, are widely considered medal contenders for London. Set in the rugged and mysterious Highlands of Scotland, Disney•Pixar's "Brave" follows the heroic journey of Merida (voice of Kelly Macdonald), a skilled archer and headstrong daughter of King Fergus (voice of Billy Connolly) and Queen Elinor (voice of Emma Thompson). Determined to change her fate, Merida defies an age-old custom sacred to the unruly and uproarious lords of the land: massive Lord MacGuffin (voice of Kevin McKidd), surly Lord Macintosh (voice of Craig Ferguson) and cantankerous Lord Dingwall (voice of Robbie Coltrane), unleashing chaos in the kingdom. When she turns to an eccentric Witch (voice of Julie Walters), she is granted an ill-fated wish and the ensuing peril forces Merida to harness all of her resources—including her mischievous triplet brothers—to undo a beastly curse and discover the meaning of true bravery. Directed by Mark Andrews and Brenda Chapman, and produced by Katherine Sarafian, "Brave" is a grand adventure full of heart, memorable characters and signature Pixar humor. Opens on June 22, 2012, in Disney Digital 3D™ in select theaters. "Brave" is rated PG by the MPAA. For more information, visit Disney.com/Brave, like us on Facebook,facebook.com/PixarBrave, and follow us on Twitter, twitter.com/disneypixar. Headquartered in Colorado Springs, Colo., the National Archery Association, known today as USA Archery, was formed in 1879 to foster and promote the sport of archery. USA Archery is the organization recognized by the U.S. Olympic Committee for the purpose of selecting and training men's and women's teams to represent the U.S. in Olympic Games, Paralympic Games and Pan American Games. USA Archery also selects teams for World Championships and other international competitions annually. Membership in USA Archery is open to everyone involved in all disciplines of archery. USA Archery sanctions more than 300 events annually and conducts the U.S. Archery Team Qualifier Series as well as Indoor, Field, Target and Traditional National Championships. For more information visit www.usarchery.org.

How to Watch the PlayStation State of Play